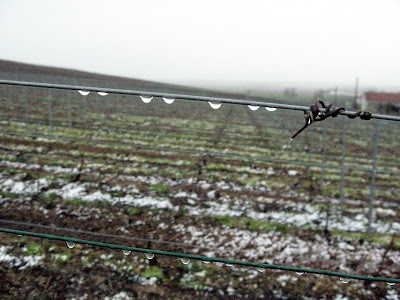 Snowflakes transform into drops of water against the wires of the vineyards at Verzy.

The snow may not excactly have poured down... and most of the flakes disappeared straight away.

But snow is still snow, and the heavenly bed covers were certainly shaken over Verzy and surroundings all monday. At the moment the météo talks about snow the next two days.

So far we have had no frost, which besides would be very unfortunate. The buds of the vines have started their development towards the first leaf of the year. The buds of the Chardonnay-vines, that are always first to develop, have begun to push away the brownish scales, that cover and protect during the winter, aside. Our last-developped Meunier-plants are still in winter position. May they remain so another while.

The snow of this monday is the first snow, I see this year. Strange weather indeed. 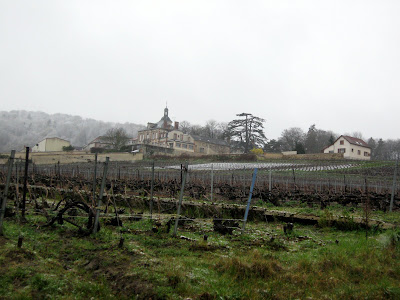 Plot with snow below Verzy.