Meet the Yellow widow in Illum

More than 12 years ago I saw my first champagnebar. It is situated in Reims, just across the street from the big, central Place d'Erlon, and it is not excactly high tech. Actually it reminds me more of the kind of little more or less stationary chariots where you buy your hotdogs in Copenhagen. Just a little bit more Art Déco chic since this after all is France. Anyway, it is not sausages but champagne à la coupe, they hand over the counter.

There are lightyears between this and the ultratrendy space, that Copenhagen department store Illum has introduced to fit the galloping Danish consumption and the luxury trend of the time. However only in December. Danes still mainly drink champagne in the Christmas- and New Year's-season as it is anyway quite general all over the world.

It is the French behemoth of luxuries LVMH (Louis Vuitton Moët Hennessy), who is behind the initiative. Which is why you can only buy the champagnes of LVMH, and only some of them. Names as Ruinart and Krug, that also belong to this economical giant of the champagne, are not available.

The classic Yellow Widow, as the Veuve Clicquot-Ponsardin is popularly known in Denmark, is not difficult to find in December. It is still the sure and often also lonely brand, you will find if you buy your wines in supermarkets such as Foetex and Kvickly in the days before Christmas. So this is just another possibility of trying the lady, even a lot of Danes do not even like the taste. In Illum they can try out the Moët & Chandon instead or even upgrade to a Dom Pérignon. Prices per glass according to AOK begin at 75 kroner(10 euros).

The appellation champagne is defended tooth and nail by the lawyers of the organisation of the champagne industry, the CIVC. It is easy to understand - for me anyway - that they do not want to share name and glory with sparkling wines from other parts of the world. It is more complicated for my mind to follow for instance their wish to eliminate champagne as the name of a colour.

I should like to know how these interpreters of clauses would react to this charming application of one of the inhabitants of a true Granny's garden.

"If you want to prepare Champagne, you will only have to add two teaspoons of this must and mix it with a bottle of French wine, bottle it and shake it well". (My translation).

The mentioned juice is made of white currant. A berry, I mainly know from old gardens, especially in the white version. Some people think, that champagne is sour dishwater. I wonder if that could be an effect caused by the juice of the currant?

The recipe originates from the "Handbook of the Housewife", 1903. You will find the entire recipe here (is it not typical that it will be in a Norwegian webpage that a thing so inadmissible will turn up?) ;-D

Esca up in smoke 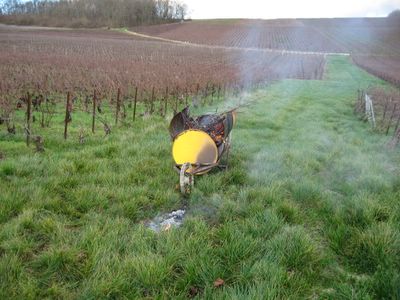 The day after the tornado is quiet and beautiful. Decembersunny and made in heaven to go work in the vines.

Alain spends most of the light hours of saturday in Loisy-en-Brie in the very extreme end of the Côte des Blancs to get rid of Esca-infested Meunier-vines in our two plots.

It is some weeks ago now, that he spent some hours spraying the diseased plants with red colour. Today it would have been impossible to distinguish diseased plants from healthy ones. Once grapes are gone and leaves fallen, the naked branches look quite alike no matter their condition.

Alain removes all branches so that only the stump remains. The entire root is a different story that cannot be removed without the intervention of a lot more horsepower, so for the time being they are left where they are. 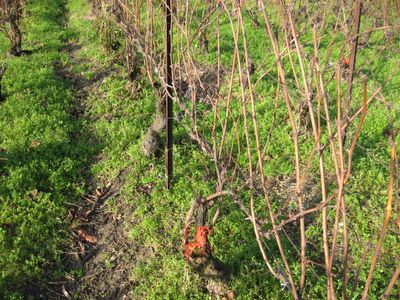 Red alert: An Esca-diseased plant to be removed.

The two plots all together make up a bit more than one hectare. In one day Alain removes almost 70 percent of the diseased plants. There are a lot more in the new plot, that we have received back in a rather poor condition.

We would have preferred to see no more Esca in the old plot, since we used quite some time last year to remove diseased plants with roots and this year to replant more than 400 replacements.

But this is not how it all went, and it is a destiny we share with a lot of others that inside and outside Champagne fight this infectious disease as well. It is spreading rapidly these years because of the warmer weather and because the chemical to fight it has been forbidden in some years now.

Champagne is normally a rather expensive pleasure, especially when you buy it at Danish prices. Whether it is shops on the net, distinguished old wine merchants or gastronomical temples, most sell the fizz at rather elevated costs.

Instead why not try a bid for bubbly on an auction on the net?

Right now and a few days into the future, the netauction QXL boasts two auctions of champagne. One - Mumms flagship, Cordon Rouge - is at the moment at a price that as far as I can tell is a bit of a finding in Denmark. (To compare 220 kroner in Billund Lufthavn)

I am less sure, that it goes for second bottle too, even it is in another class - the house of Ruinarts middle level - the "R", in a magnumbottle - and that goes for the price too.

If the price of the bottle and freigth runs up in something more expensive than you initially expected, why don't you comfort yourself with the fact, that you in any case have a true royal taste. Something that surely cannot be bought too expensive? 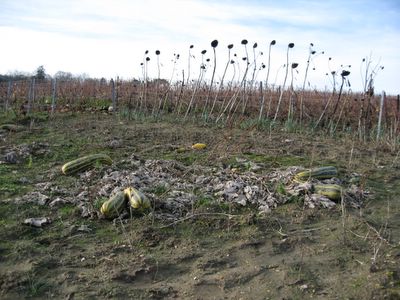 This little vegetable garden at Verzy could be planted with vines instead of pumpkins and sunflowers.

Enlarge or not to enlarge.

Much is said and written in the local press, in the professional weeklies, and in meetings for wineprofessionals. Should, should not.

On one hand, it is very important to be able to deliver champagne, when the market is there. On the other it is a bad idea to enlarge, if the customers will not continue to demand still more and more champagne.

No guarantees
Guarantees of course cannot be given. It does take a while to enlarge the supplies of champagne: The vines will only grow the maximum amount of grapes after three years, and on top of that the champagne must age at least 15 months. You've got to be some sort of a gambler.

The chairman of the independent winegrowers, Patrick le Brun, cannot stop repeating - it seems - that there so far is a good margin between the current sales of champagne (317 million bottles the last 12 months) and the amount of bottles that will be sold in two-three yeares (360 million bottles).

But when the INAO-responsible in the champagnecapital of Épernay, Eric Champion, says to the local paper l'Union, that "there are no possibilities of development", because all land is already planted, it still gives second thoughts.
And INAO - the ministerial organisation, that controls the AOC's(Appellation d'Origine Controlée) - is currently working on a report of the possibilites of enlarging the territory.

Work of experts
Five experts - a geologist, a geographer, a historian, an agronomist and a expert in plants have since 2003 examined the land in the communes with vines. The report will contain information about the history of each commune and its suitability as supplier of land to grow vines for champagne. The final result is expected in 2009.

It is expected that the deparment of Aube in Southern Champagne will have quite a few hectares acknowledged to join the appellation. Aube had a lot less than the more known - when it comes to champagne - department of Marne, when some vines were replanted in the 1960'ies.

With the very high prices of land at the moment combined with the very good sales of champagne, it is of course extremely interesting to buy some of these hectares. Rather at before- than after-prices.

1.500 difficult hectares
In the meantime 1.500 hectares, already acknowledged for growing vines for champagne but not used, actually do exist.

Well, that is, the land is very much in use. As cemeteries, forests or a small vegetable gardens as the picture above shows.

And if you are more into chewing the seeds of sunflowers or eating pumpkins in the long winter, I suppose you are better off with Grand Cru-vegetables than grapes. But each time I pass this place I cannot help thinking: Who is this person, who undauntedly leaves the bubbles to all the others and grows tomatoes, strawberries and pumpkins instead.