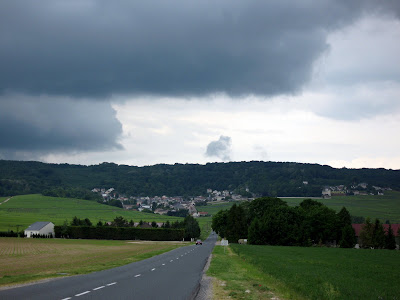 I am hardly the only one in France, who will remember the summer 2007 like this: Heavy cloud on top of tiny village, here Verzy in Champagne.

Since New Year always the same song: The weather has gone mad. Well, it certainly has been different than usual. It set out really warm, since it got really wet, and then, what happened to the three-four usual weeks of heatwave I have got used to during summer?

Now, the weather of course always comes up, if you lack more interesting subjects to talk about. The funny thing is, that even most people in Champagne will probably remember the summer of 2007 as the wettest, coldest, most dank ever, they are contradicted by the statistics.

The other day Météo France said to our regional newspaper l'Union, that the average temperature is close to normal , as is the amount of rain in the department of Marne. Some other cities in France have experienced double or even triple the usual amount of rain.

Lack of sun, lots of wind
In our part of France - the closest bigger city is Reims, the departement is Marne and we are situated about 150 kilometers east of Paris - the unusual part of this summer is mainly the lack of sun. Grey clouds have very effectively gathered on top of our heads almost all summer. On top of that double the usual amount of wind. And you reach the feeling, that summer was hardly here at all before it is all too soon over.

Email ThisBlogThis!Share to TwitterShare to FacebookShare to Pinterest
Etiketter: Recipies 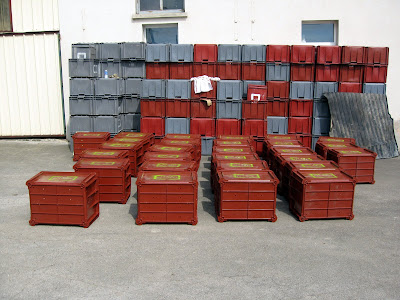 The boxes are ready in the yard, they will be filled with grapes from wednesday. We have half a hectare more than last year, 28 new boxes are bought. Alain has spend a couple of hours to name them.

This means, that everybody, who sell grapes in the cooperative, can see, that the other owners deliver good quality grapes. And they do comment each others deliveries as they queue up for the weighing.

Each box contains 50 kilos. We just need so many, that we won't run out of empty boxes even a batch should spend the night at the coop. If we really get in trouble, we have managed to borrow boxes from winegrower-friends, but this is only possible when we don't work the same days. 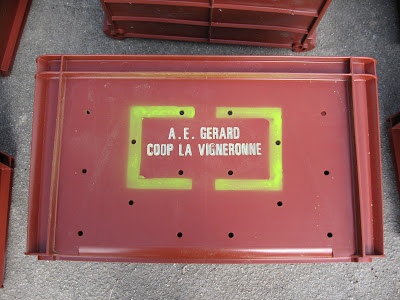 Sour grapes better than rotten ones

The grapeharvest in Champagne began yesterday. Under grey skies and with many worried looks. Officially everything's fine. In most vineyards the grapes still cling unto their branches, in good and healthy shape.

But the rain continues, now accompagnied by morning fog. In this region normally not before late September, but nothing seems normal in 2007 when it comes to the weather, And the airy quilts of hazealready now cover vines, fields and villages. We expect autumn with it. And rot.

Worst hit is the southern department of Aube, where one out of three grapes is rotten. The CIVC cross fingers that the sunny weather forecast for next week - many will start to harvest next monday - will relieve the risk of rot.

A bit of a distance still. And the last part of the efforts may still turn out to be a deep dip in the bag of sugar. We will know in some months. What seems sure is, that the vintage of 2007 will demand know-how from its vintner.
Indsendt af Sol kl. 4:19 PM No comments:

The grapes will stay on our vines until August the 29th.

We had hoped for the 27th. The technicians of the CIVC have lit the green light at the 25th for the communes, where our vines grow, Soulières and Loisy-en-Brie.

But our cooperative does not want to open the game before Vertus, where most of the members grow their grapes. This commune quite extraordinarily starts four days after instead of before us.

The right timing
Too bad, since our Meunier-grapes contain 8 degrees in the upper and 7,5 degrees in the lower plot - there is still a bit of a distance to the preferred 9,5 degrees - but the rain of the summer, said to continue this week, makes the situation a bit too exciting.

One thing is, that sun would do good things to the vintage of 2007, at the moment it is ok but not your dream. Another, that we risk loosing a bit or a lot, if the grapes begins to rot, before we pick them. As little as two days can determine how many grapes we will eventually bring to the presses in a healthy condition.

Alain did joke with the president, that he will have to supply us with some other grapes if these ones will rot due to their descision.

Expectations: Ok
The grapeharvest in Champagne thus finally has started eight days later than the first predictions in May. Still very early compared to the normal start around September 20th. 20-30 yeas ago in October. The earliest communes are in the Côte de Sézanne, where the first flowers were also found.

In some ways this early harvest is a bit of a surprise. After a spring and summer where the sun has been rare, and clouds have covered the region more or less all the time.

The explanation is, that winter then spring was so unusually warm and beautiful. This gave the grapes such a lead, that even the bad weather that followed could not change the direction and speed, says the chief technician of the CIVC, Laurent Panigai, according to the newspaper l'Union.

Too little sun
A great vintage should probably not be expected from 2007. The grapes have simply not seen enough sun. The French Ministry of Agriculture expects a total yield from the French vineyards of 49,9 million hectoliters, which is five percent less than the average the last five years. In Champagne the chief technician of the CIVC estimates the expected yield as good.

The disease mildew, that has spread in several French wine areas this year, is still under control in Champagne.

The last excitement before the harvest will concentrate on the risk of rot. The situation is still ok in our plots. We just hope for sun and 24-25 degrees Celsius to secure a healthy yield. The vintners will deal with the rest.
Indsendt af Sol kl. 10:58 PM No comments:

Our part of the grapeharvest begins on August 27th.

Late, when we compare with the first dates published in May, that suggested mid August, the earliest vendange in anyone's memory. But it is still very early compared to the usual period around September 20th. And almost impossible to believe when I look back on the summer, as wet as can be, but maybe not entirely as cold as I remember.

In the vineyard Alain has seen how our Meunier-grapes are busy changing colour. From the green of summer to the violet-bluish of autumn: This is really last round before the harvest.

Red grapes ready before the white
The general trend is - another extraordinary feature of 2007 - that the red grapes - Meunier and Pinot Noir - this year are more advanced than the white Chardonnay. Liked by few, but a fact.

When you press the white grapes first and the red grapes next, you don't have to clean presses and vats inbetween. If you press the other way around, you will have to clean the equipment halfway in order to avoid any mix of the slightly darker red juice with the slightly lighter white juice. Since the finished product must be as clear as possible, this year will include extra cleaning for those, who grows both varieties.

Analysis of the content of the grapes
Our cooperative reoopens after summer holidays on August 20th.

We will deliver grapes to get their content of sugar/acidity measured. We also have to arrange when we can deliver grapes, since - again very unusual - we can start to harvest four days ahead of Vertus. Our plots are in the communes of Soulières and Loisy-en-Brie.

On top of our hectare of Meunier two more hectars of Chardonnay and a bit of Pinot Noir will be harvested.
Indsendt af Sol kl. 10:51 PM No comments: