The young vines are ready 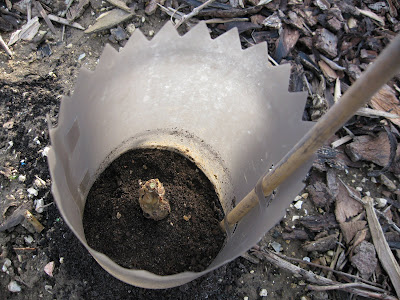 The young vines were planted in April 2006. A piece of plastic protects them.

Today Alain pruned our young vines. Those that you normally do the very last, when the risk of frost is as small as it gets here.

Only around 10 of the 425 little vines planted have not made it. The 415 survivors are pruned thoroughly. The first years they are not supposed to produce anything. Instead they must concentrate their energy to build strength. We help them with this, when we remove all buds but one.

With the young plants finished, the pruning of this low plot, that Alain has managed now in 10 years, is completed. As soon as possible the branches must be attached to the wires. Then there is still the upper plot to go.

Half rows
The young guy who prunes most of our vines has already moved on to the miserable cordons in the upper plot. He still only finishes a row half before he moves on to the next. Until you look closer, you get the impression that he is much more efficient than he actually is. Six rows look like six rows rather than what they are, three rows. We have pruned five rows ourselves.

So there is still plenty of work in the 42 rows. On top there is a couple of days work to collect branches and burn them. And then finally the attaching, where you bind your branches to the fence. 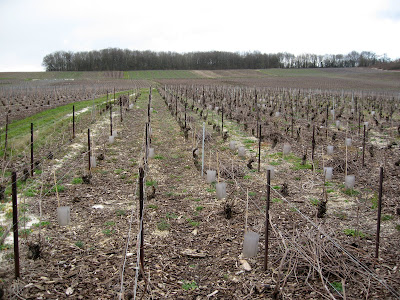 The lower plot with Meunier-grapes is finished.

We expect to have maximum a couple of weeks, before we will see the sap flowing from the bias cuts. It is called les pleurs, and is a sign that the growth of the vine has begun. You can prune and bind, even when the vine grows. But you are in much bigger danger to destroy buds because they have grown bigger and then break much easier.

Risk of early start
Everything is early this year. I have daffodils in my garden, the birds use their score of spring, and in Verzy, where the vineyard workers began to prune unusually early, the work is more advanced than normally at this time.

In the Côte des Blancs, where our vines grow, the plots look more like business as usual. Though we do pass quite a few unpruned hectares on low and almost flat land - very exposed for frost- and therefore very likely to be pruned as late as possible.

Alain foresees débourrement - when the buds begin to grow and unfold their first leaf - fast after the sap has risen. If so it will be very early indeed.

When checking the statistics of the last ten years, I see that the last year with big destructions due to frost - 2003 - also showed the earliest débourrement between 1996 and 2005. That year the first leaf came out on March 29th - later than what could be the case this year. 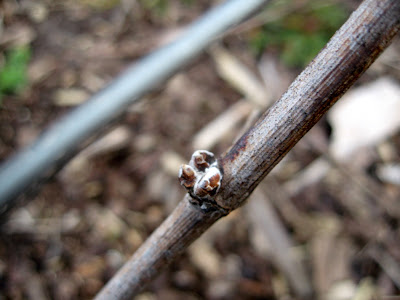 The buds may develop very early this year.

The problem with a very early start is the risk of frost, always a heavy risk hanging over the vineyards of Champagne and other places in France as well. If it freezes when the buds are busy, the risk of having a smaller or bigger proportion of them burnt is big. Which may cost you grapes. If you have not pruned yet, when frost comes, you can try to prune your way out of problems, since it is unlikely that everything will be destroyed..

I suppose in the end the Dame Nature knows better, so I will stop the talking and just prune on instead. 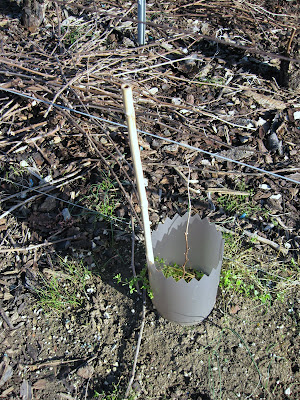 The young vines before they are pruned.