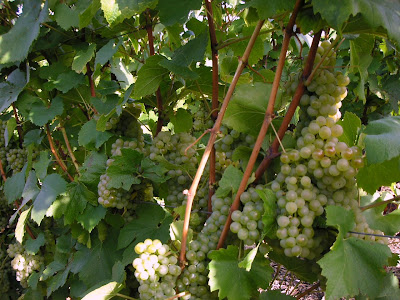 Chardonnay-grapes from the harvest of records in 2004.

To grow grapes is an occupation that demands an ability to stay cool. I have said it before. But facts often explains much more frankly than words, so here goes.

The numbers below give an overview of the years 1996-2005. They were published in the december 2006 edition of the magazine Le Vigneron Champenois.

10 years with the grapes
The overview contains the dates for débourrement, full flowering and grapeharvest for the three varieties of grapes, that are the far most common ones in Champagne: Chardonnay (green), Pinot Noir (blue) og Meunier (blue).

In those 10 years the vines have generally unfolded around April 15th, they flowered around June 15th, and the grapeharvest began around September 18th. To find bigger variations - such as the days where the grapeharvest took place in October - you need older dates than those of 1996. The table shows the earliest and the latest date for unfolding, flowering and harvest:
If you study the dates a bit more, especially 2003 differs from the other years. And 2003 was a year, that had quite a lot of unpleasantness to offer.

This year the winter was cold in Champagne. It got warmer, even pleasantly mild already from mid February. The warmth made the vines develop early, and when the spring frost arrived in the end of April the destructions were rather extensive. Alain brought these bad news on my very last work day in Copenhagen.

Those days I didn't get the seriousness of the message. I have understood more since. I believe, that the numbers of Le Vigneron Champenois still today make quite an impression: