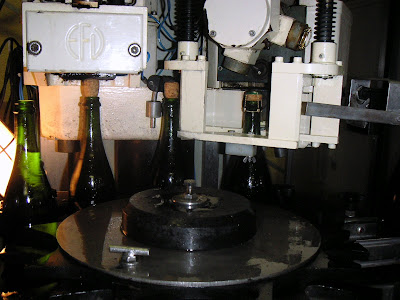 Assembly line: Champagnebottles are dressed with the cork, capsule and muselet.

Now we know. The sale of champagnes in 2006 has been settled. As expected it was big.

Even it is not enough bottles to pass the sales of the Millenium, this record does not really count here, since 50-60 million of the 2000-bottles were only drunk the following year with a decrease in sales of a similar size.

Foreign markets grow
The French market still gulp down more than half of the total bubbly production of Champagne (56 percent in 2006, 58 percent in 2005). But the tendency is, that the main growth takes place outside France.