Cordon before and after

For a change (;-D) we spent our Sunday to prune some more Meunier-vines. 200 meters finished, 75 meters for me and the rest for Alain.

Some weeks ago I counted the number of cuts per plant to about 35. How many of last years branches we remove, I don't know. Between 75 and 80 percent maybe? Alain is not too sure either, but there's not a lot left when we are finished. Have a look: 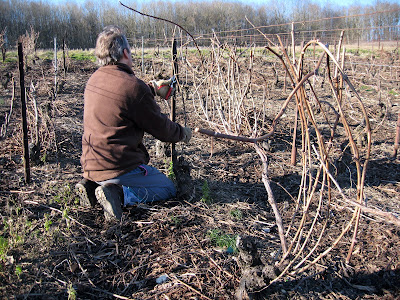 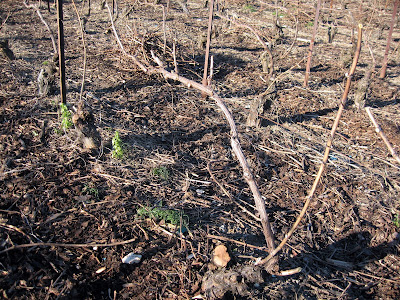 The same vine before and after my pruning. A piece of the old stem has also been sawed off. That's the big, brown surface, you see in the bottom of the picture. Loisy-en-Brie, February 10th.

We have another 300 meters to go, to redo broken wires - I have met a few - and to change broken iron posts. Alain even has the ambition that he wants to place new plastic bells around the young vines to avoid, that rabbits eat the buds.

The weather is fantastic each Sunday these days. 10 degrees Celsius, a cool but pleasant wind, the sun already warms so much, that I have used sun screen the last month with my heavy clothes. Still looks a bit like early spring, I search to see more signs, before I will begin to conclude, that this season could take off early like 2007.

Honestly, I begin to long a bit for weekends, where we don't move the heavy gear weekend after weekend to go prune the vines. Still a bit early to start longinng, since we have quite a few weekends of attaching branches to wires and on top of that we still haven't burned the cut-off branches, that at the moment are placed under the vines in nicely cut pieces.
Indsendt af Sol kl. 12:14 PM