Hammer and the big shears 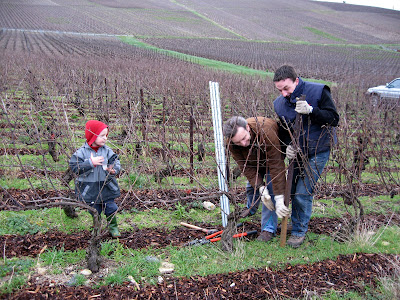 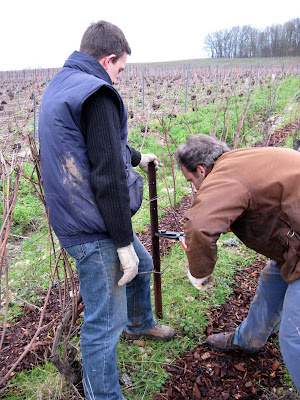 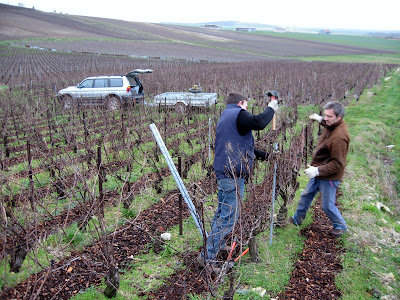 Alain and David change posts and destroyed wires in the new plot.

Alain and David have used a good part of the light hours of last weekend to remove 100 old and rusty iron posts and replace them with new ones.

Kilometres of wires must be changed as well. It is pure hell to do it at this time before the vines are pruned, because old branches are entangled criss-cross. Today they therefore only change the most necessary wires, that is the broken ones.

The rest will be changed after all the vines are pruned and before the time of attaching, since the bottom wire is necessary at this time. 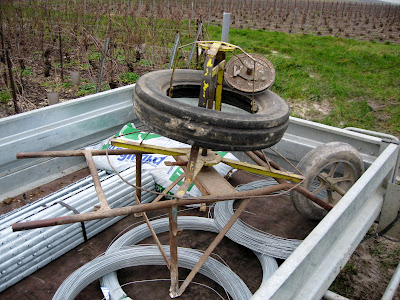 The pruning will continue this Sunday, if weather allows it. Right now it is so cold, that most of the people around have temporarily stopped to prune. At minus two degrees Celsius, it is excactly so cold, that the frost may damage the vines.

That is if you let it in, via the wound that the secateur leaves a short while of a day or two after pruning. Then it heals and - as the rest of the plant - it stands frost as low as minus 15 degrees Celsius.

These days many either stay at home or do other jobs such as collecting the cut-off branches and stems like one of our neighbours was busy doing yesterday.

We are not really collecting anything since I have not worked on the possibility of transporting the stems to Denmark to sell as firewood for the high-end BBQ's of the summer. We still have a big heap from last year's pruning, that we never succeeded selling, so we are not excactly eager to collect more this year, before we have gotten rid of some.