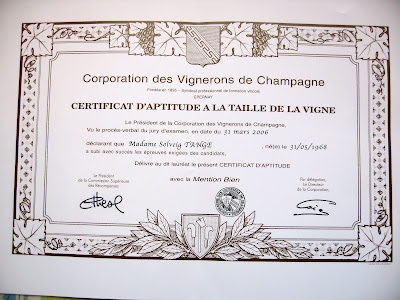 I have received my diploma. This is what it looks like.

It is the physical proof that I am now a certified pruner of the vines. What a delight. After a course of 10 Thursdays followed by half a day of exams last spring in front of a jury whose good-will I could not complain about, I still think that I actually did learn how to prune. But I will send a kind thought their direction anyway.

A matter for the president
It was the president of the independent winegrowers of Verzy, Laurent Bouy, who presented the paper yesterday at the yearly party of the winegrowers, the Saint-Vincent. At the same occasion I made sure to get it properly baptised.

Both Alain and I were rather unprepared of the course of the party, since we participated in the vin d'honneur for the first time. We learned that apart from the diploma followed by a handshake of the president holders of new diplomas like ourselves are also presented with a proper shower of the new wine, properly served in the long glasstubes, that are used to taste the new wine straight from the vat. You are served so gently with the tube, that you better swallow fast. 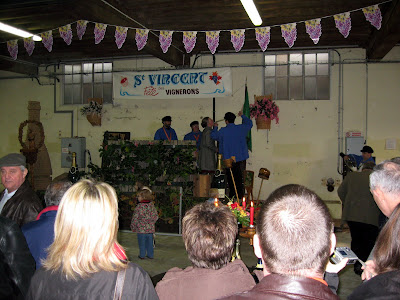 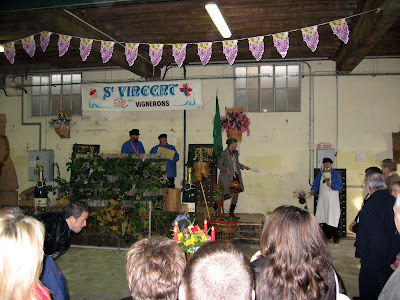 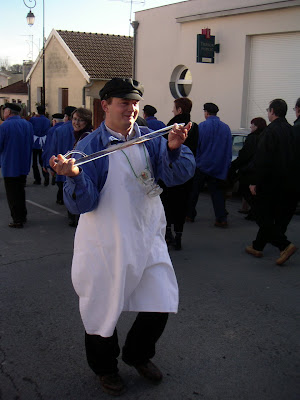 I never understood whether it was my own task to indicate a "no thanks" at the nice vigneron, who just wanted to give me a treat. I suppose. If it is so, I have only myself to blame that I simply could not swallow the wine fast enough, and therefore had my shirt thoroughly baptised as well. And I should be even further irrigated.

A circle of the locals
After this more official opening a couple of hundred guests or more went to the cheerful continuation. On top of a number of tables, constructed by old wooden casks and decorated and lit with candles, were placed a promising circle of local cuvées, bigger and smaller, known and unknown. All we had to do was to start tasting. 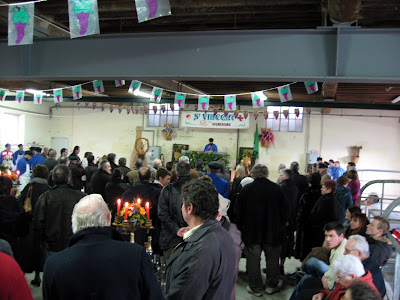 Once again I found - as long as it was still possible to taste properly that is - that also in Champagne not all gold will glitter. We drank both big and wellknown brands, whose cuvées contain wine from Verzy, but it was a local and small winegrower whose champagne eventually was just so much better than anything else. According to my taste anyway.

A nothing less than incredibly wonderful brut. Just for fun I passed his house this morning, and I was not very surpried to see his collection of mentions in various wine guides, amongst them Hachette. This champagne is simply too good to keep a secret.

Another - small grower, but big in Verzy - may have been interesting. I was hardly able to taste anything anymore when it finally arrived in my glass. At this time my taste buds had reached the state of just about not-existing. Around the same time my oratorical gifts and great sense of humour peaked ;-D.

Back in our house to share a lunch within the family, it seemed a bit too cheerless to accompagny the food with only wine, so we opened another bottle of champagne. But really the time to swallow yet another bubbly was over. Noone could contain more. So we ended the Saint-Vincent with a lot of water anyway and a hardly touched millésime of the Côte des Blancs in the fridge. Noone can complain about anything but lack of capacity.