Master of the cordon 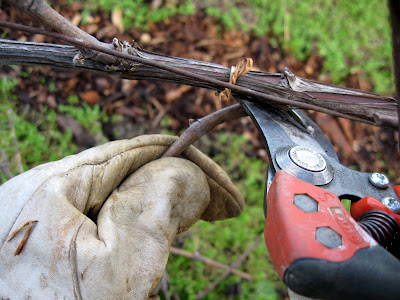 The cordons in Loisy-en-Brie have an incredible amount of useless stems. Here is one under instead of on top of the cordon.

It takes me a full day to work myself through 100 metres of vines. My speed is quite steady, it seems. I measure against the row I did last weekend, and I note, that I make it just about as far today as I did excactly one week ago. So I consider this as my current level when I practise the secateur and the big scissors whilst rolling on my little bench on wheels.

My impression of the plants in the plot, we just took back, is rather miserable. Just about nothing seems just close to normal. The cordons are pitifull, the shoots so fragile that they seem to be able to break for nothing. And should there - alas - be some good stems with a solid thickness of about that of a (well, okay, my) thumb, it will definitely be placed in a way, where I cannot really make use of it. It will typically occur on an extra cordon, that I must eliminate to bring these vines back to something that at least resembles the rules of the INAO.

Renewal from the ground
We have decided to cut our way all through the illegalitie. So you will not find more than one cordon - the old branch - when my secateur is finished with a vine. Unless of course it is a double that will typically cover the space of a dead plant. This is renewal from the very ground, just about as much as it gets without excactly replanting. Which by the way makes the next grapeharvest come to my mind. 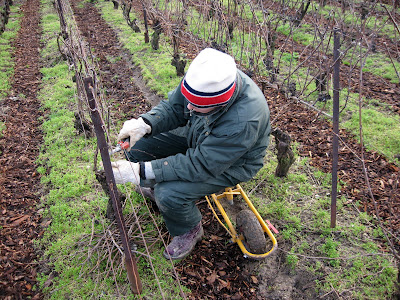 Since for many of these sadly looking vines it is sort of hard to imagine that there will be any yield to pick. Maybe one grape here, another there.

I can see that I do not prune many of the fertile coursons - the short branches on top of the cordon. Well, they are supposed to be placed on top. But here I have to stick to a more personal, practical interpretation of the rules, since I in many cases are not able to prune any coursons if I cannot do illegal ones, and still we do like to get at least some grapes.

Koncentration of sap
The idea of this very thorough shaving is - apart from moving our way back towards the rules of the region - also to bring back the plant to a condition where it spends its energy in a better way.

To concentrate the power means that I remove all wood that is not necesseary. Only stems that will be fertile next season are interesting. And then of course on top of that the little rachet at the bottom of the stem. This is where you hopefully will get the material you need to grow a new cordon when necessary.

The crazy tangle of stems, that often exist on these vines, is more than anything the proof of bad maintainment. If you take well care of your vines, you will for instance remove unnecessary buds in spring to avoid that the plant spends energy on growing useless stems, that are not fertile anyway. Last year no one found such as walk important in these rows, that is very visible.

I have found quite a few rotten grapes left on the stems, I remove. I wonder. It is more than hard to believe that there has been a surplus of grapes in a plot, where the plants look like these. These grapes may also have matured after the vendange, of course. We will know more next September. 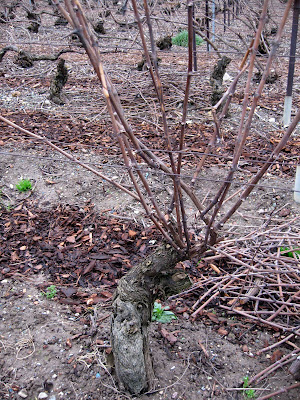 This almost hopeless tangle of stems is supposed to look like... 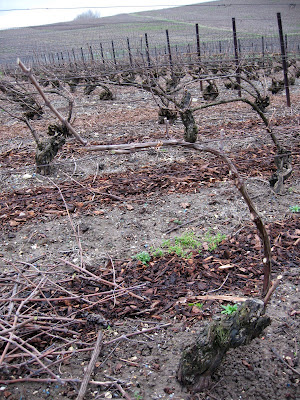 ...this horizontal stem with prolongement and coursons.