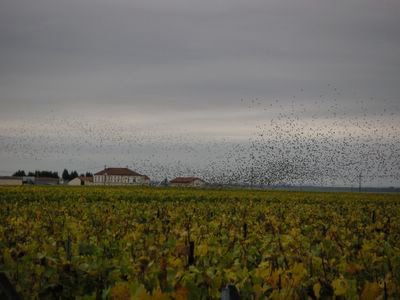 Flocks of starlings gorge in champagne-grapes at Avize.

The starlings have landed in Champagne.

At this time of the year we usually see them when we drive along the highway between Épernay and Avize in the area that is called Côte de Blancs. It is the same huge groups of starlings that we in the end of the summer see forming flocks and forage along the Danish Wadden Sea. Now in the middle of October they have reached Northern France.

The flocks must be counted in hundred thousands maybe millions. They seem to enjoy resting in the big and rather flat piece of land, that starts south of Épernay and continues to the other side of le Mesnil, all is covered with vineyards. However there is always more birds at Avize.

Again and again the starlings spin around. They settle, they take off en masse and fly a bit onwards, whilst swirling around in movable patterns as in a kaleidoscope. And as Danes may know it from the phenomenon "Black Sun" in the marshlands at Tønder in Southern Jutland in late summer and early spring. Just before the migration.

The birds like the grapes. My mother-in-law remembers how she used to cover the vineyards with wire netting, but this action is no longer necessary. The grapeharvest now generally takes place in the end of September, so nowadays the grapes are gone as the starlings arrive. However they do not mind a treat of the grapes that were not mature during the grapeharvest and may still be rather acid. And for the sake of variation they are only happy to party with the winter wheat seeds of unlucky farmers.

From the landscape windows at the wine educationcentre in Avize you have the most wonderful view of the ballet of birdwings. In this spot they will also tell you, that passers-by take interest in the phenomenon as well. Several drivers have had accidents when following the birds with their eyes rather than the road.