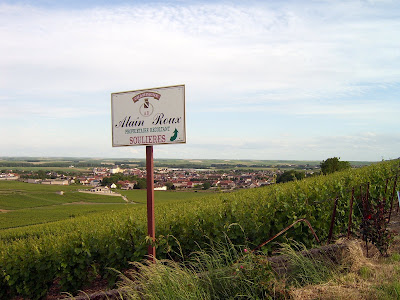 An independent vigneron from Soulières has his plots on the slopes above Vertus in the Côte des Blancs.

Before her retirement my mother-in-law was well placed in the middle class of the owners of vineyards with her three hectares of vines. The average exploit in Champagne covers just average 2,72 hectares. This tiny acreage makes the exploits of the area to the smallest exploits with vines in France.

On top of that there is quite a distance between the biggest owners of several hundred hectares of vines and the smallest with less than half a hectare. And actually one third of the owners belong to this small group, another 15 percent owns between half and one hectare. Most owners in these categories are part time winegrowers, the same status as I try to achieve at the moment.

One third in the middle class
Another third of the owners have between three and ten hectares. Finally a big fifth - 22 percent - owns more than 10 hectares. In this group some small and big champagne houses can be found. Companies like Veuve Clicquot-Ponsardin (LVMH) and Louis Roederer own a lot of hectares.

We grow a bit more than one hectare ourselves, and therefore we rank between the rather small growers. You normally need at least one hectare before you start to think about making a living from your grapes.

Our two plots - one for Alain, one for me - are amongst the almost 300.000 plots, that the appr. 32.000 hectares of vines of Champagne are divided into. The exploits of the department of Marne are the smallest with average 2,45 hectares. The plots of departments Aube and Aisne are bigger with average 3,62 hectares and 3,65 hectares.

The numbers are the latest, official numbers from the Agreste statistics of agriculture from the autumn 2005.
Indsendt af Sol kl. 4:02 PM