Everything has been lifted (I) 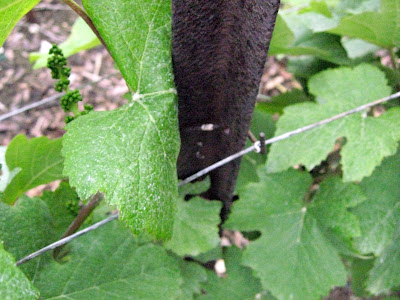 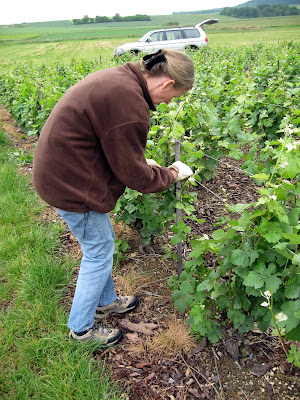 The double thread is lifted and placed on the first hook of each iron post.

All vines have now been lifted in our two plots of Meunier-vines just outside the village of Loisy-en-Brie in Champagne, France.

We have been so far behind, that we have tried to cover three - at least two - tasks at once.

Three tasks - or two - since we have only done the part of the palissage, that concerns putting small stems, that have grown longer, back between the threads. Later will come the little plastic clips too.

Because of the work load we have had to choice a rather pragmatic attitude towards the removal of the stems. This means, that we have only removed the stems, that grows with a direction towards the next line of grapes, because these stems soon will make it impossible to walk in the paths, if they are not removed. The rest, that could have been removed too, stays due to lack of time. More about removing the stems here.

The most important task during these two days was to lift the double thread, and this we made. About time it was: When the stems from one line, begins to twine themselves around the wires of the neighbour line, it is about time to restore order. When you lift the double thread to the first hook, it presses the stems on both sides towards the centre of the plant, which will protect it better against possible damages due to storms. 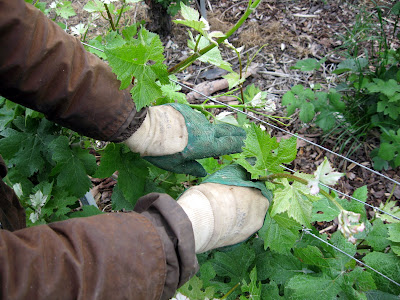 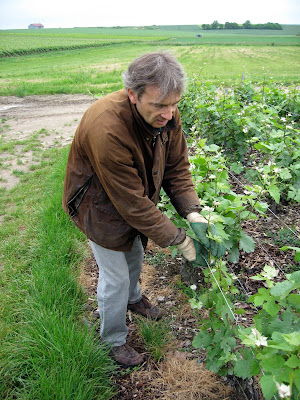 The manual part of the job is - apart from lifting - to place stems, that were not caught by the thread back behind the wires. Some have not grown long enough and will have to be put back later, when the double thread will be lifted to the second and last hook. In a week or two. The stems will grow fast, the flowering however may put the work to a break for a week. Read more about palissage here.
Indsendt af Sol kl. 10:15 PM