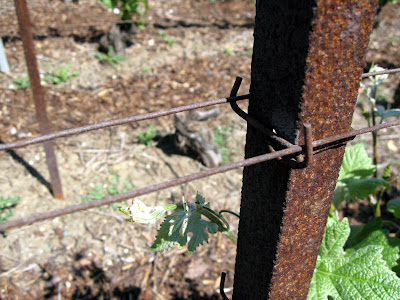 The wires are lifted to the first hook.

The upper plot has been lifted, and we are working in the lower part.

The temperatures have lowered to a more ordinary level for the month of May - around 15 degrees Celsius, a bit warmer when the sun finds a way through the clouds - the weather forecasts promise unsteady weather. Risk of rain and what is a lot worse: Hail and storms, that are both capable of bad destruction in the vines. Alain has decided to lift the wires to minimize the risk of destruction due to bad weather.

The oldest of the stems have grown well and are now longer than one meter. They begin to make it more difficult to move in the paths between the plants, as their
vrilles winds themselves around the wires of the neighbour fence. When they hang freely, they are also more exposed to destruction, by storms or passing of tractors. 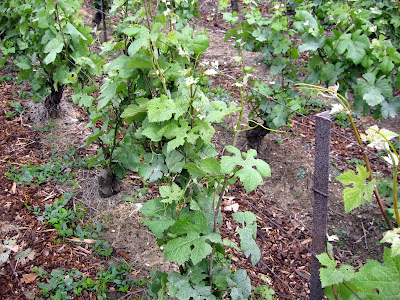 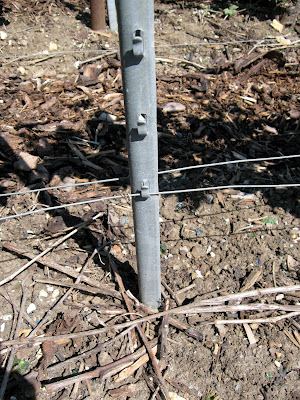 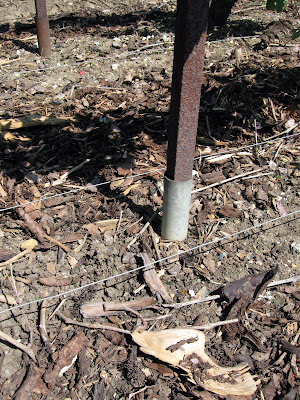 The double thread is lifted from the ground to the first hook on the posts.

The vines grow at a fence, constructed in a way, that makes it possible to press the stems towards the centre with a double thread, one on each side of the post. This double thread is hooked unto the post. When the stems in a couple of weeks have grown even longer, we lift the double thread once again to the next and last hook on the post. Finally we place little plastic clips to keep the two threads closely together, which keeps the stems between the thread, just like we want it.

It is a simple and good system, when used right. That is at the right time, when the major part of the stems are long enough to be automatically lifted by the thread. If they are too short, they must be placed manually afterwards, and of course you want to avoid as much of this manual part as possible.

Dedicated or just interested readers can compare with the development last year here. 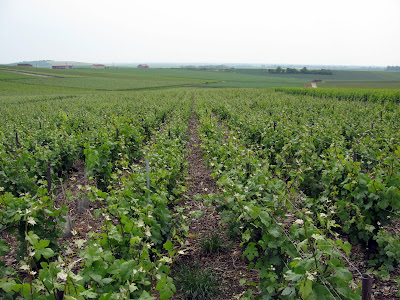 Some stems are working their way towards the neighbouring fence, which you want to avoid. The routes must remain easily accessible, since you walk a lot when you work in the vines.
Indsendt af Sol kl. 3:28 PM