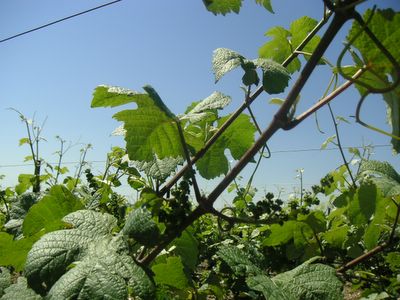 A weekend with Mediterranean temperatures is over, the first part of the palissage as well, and this week so far seems to be equally warm, which should make it possible to finish next weekend.

This sunday noon we measured 35 degrees Celsius in my mother-in-laws very sunlit courtyard, so the work in the vineyards had to be postponed until the worst heat was over by 15 hours. In the vineyards you are very exposed to the moods of the gods of the weather, and especially cold winters and burning summers can be merciless.

Rognage begun
The vines however sucks the sunlight, and are growing intensely. Now they can finally compensate for the cold spring to such an extent, that we have now look for flowers whenever we pass some vines. The flowers remain the very first, very early hint about a possible harvesttime. Whatever unprecise it may be.

Several places in the Montagne de Reims but especially in the Côte des Blancs with the early developped Chardonnay-vines the tractors have finished the first shaving of the vines - the rognage - where you simply cut the top of the stems to stop the growth of the vines in this direction.

We normally wait for the flowers before we do the rognage. Of course our Meunier are not as developped as the Chardonnay we pass when we drive through the Côte des Blancs. 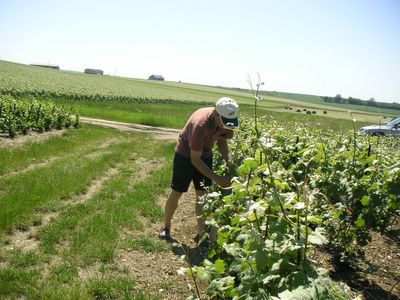 Alain lifts and put back stems between the double wire (palissage)

When the top has been cut, the vine will change its strategy of growth, and instead grow on the sides. The next few months the tractors will thus be cutting the sides of the vines when they roll through the vineyards.

Meunier og Chardonnay
In the vineyard in Loisy-en-Brie it is obvious that our Meunier are less developped than the Chardonnay of Alains mother on the neighbouring plot. The stems simply have not grown the same centimetres yet.

However, it is very much time to lift the double wire into the first hook. After driving through the Côte des Blancs we conclude that we must be the last ones to lift this year. In Montagne de Reims most winegrowers have finished the lifting too, but they are less advanced with the rognage.

Vallée de la Marne we cross less frequently - unfortunately - since this is the kingdom of the Meunier. But we do know that our cousin, who owns vineyards in the Vallée de la Marne, were supposed to lift her wires last monday. 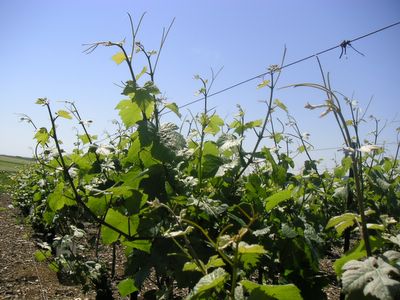 Stems with a course the wrong direction.

Fragile stems
However as we arrive, we can see, that around our plots most winegrowers have not yet lifted. Still it is time now... Alain gets almost annoyed as we get there. The stems are longer than he would have expected, some on their way towards attaching themselves to the neighbouring fence, which is certainly not what we want.

When the green stems have grown so long they are more difficult to work with without destruction. They are still very soft, thus fragile. Then on the other hand less will fall out, so there will be less manual work afterwards.

But it is certainly time. The tractor, that regularly passes here to spray against different insects and diseases, has already damaged stems here and there. That is the price you pay to be late. 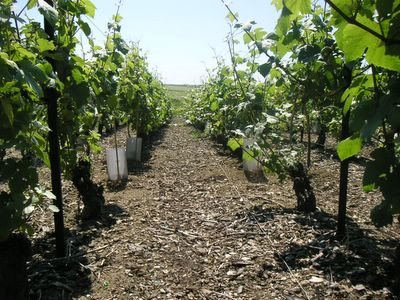 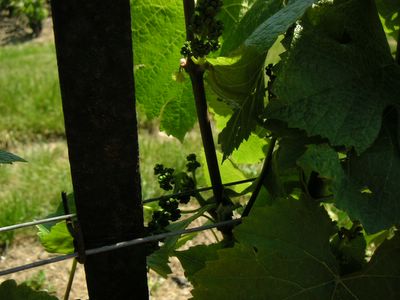 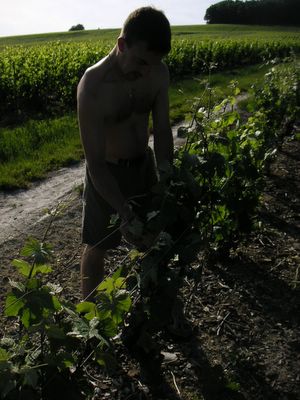 The wire on the ground is lifted and placed in the bottom hook.

The jobs is finished in between three and four hours. David is there too, which is good, both for the tempo and the morals. Even you do not actually work together you can still meet up for a drink now and then.

Almost superheated they come back in the early evening. The first part of the palissage is over. If the weather stays fine, the stems should have grown long enough to make it feasable to lift the wires to the upper and last level next weekend. This is also the time to place the staples that keeps the two wires together and the stems inbetween as the vine will grow bigger during the summer.