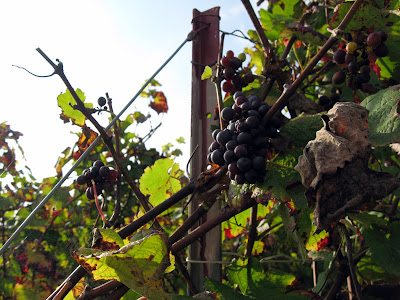 Grape prices are growing in Champagne.

Here and there the price per kilo has passed six euros. Just two years ago it was less than five. Back then a winegrower explained me, how five euros is the traditional limit of crises: Whenever the kilo price pass this limit, the crises is at hand, just around the corner.

But that was in the 1990'es apparently, in those days when champagne saw its latest crises in the years around the first Gulf-war. These days nothing implicates that the story is the same in 2007. The sale grows as the grape prices, and there are no signs of difficulties in breathing so far.

In the first six months of this year, the export of champagne bottles has grown eight percent. About one out ot two bottles are sold in France, the rest all over the world.

Growl of the big ones
Some of the big champagnehouses have been growling about a future lack of grapes this some. In Champagne the winegrowers own 90 percent of the vineyards, and they keep rather than sell some of their grapes. Either in the caves, where the bottles wait higher prices. Or to produce champagne with their own name, often sold for half the price of a similar product from a big house. Some times the winegrower's champagne is also not worth more than half. Other times you get better champagne and cheaper.

Winewriters refuse the talk about a lack of champagne in the near future. There are simply too many bottles in the caves of the area to make it reasonable to talk about close crises.

Increasing prices must be rather realistic in the future. Since somebody has to pay for the more expensive grapes. Maybe that is also why many champagnehouses at the moment introduce one prestige bottle after the other, and for higher prices than the more traditional flagships.
Indsendt af Sol kl. 10:25 AM