Learned it from the virgin vine 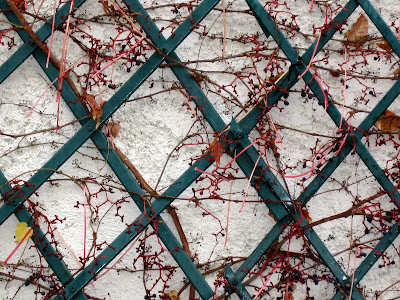 The blackbirds have been busy. Most berries of our virgin vine have been eaten. The leaves are going too.

"2008 will be a bad year for the vines," a friend said the other day. Her voice sombre as a day of doom. She elaborated:

"There are no grapes on the virgin vine this year, and that's a bad sign for the real grapes the following year."

According to representatives of third age winegrowers of Vertus in the Côte des Blancs and brought to us by our friend, who is bookkeeper for loads of other winegrowers, daughter of a father who used to educate winegrowers, and married to one herself. Shouldn't she know what is worth mentioning?

Heritage of observations
Personally I find these old sayings very interesting. Even they may not be scientifically proved and approved, these people have several decades of experiences and observations to draw from. Some of them even stand on the shoulders of a grandfather, who intelligently has passed on such valuable heritage of observations.

If they are right, next year should be fine in the Montagne de Reims. In our yard we've had lots of birds around these last weeks. Busy eating the berries of our virgin vine, that has been full of them. Better ask the opinion of one of the grey-beards of Verzy.
Indsendt af Sol kl. 11:02 AM