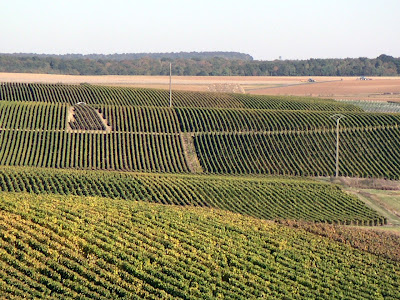 Plots with vines in Champagne are very expensive. Now more will join in.

More vines are on their way in Champagne. The first step forward has been made as 40 communes from four departments with suitable soils for vines have been listed on a paper due for the authorities in the INAO. Such was the cover story of our local paper l'Union earlier this week.

The rumours of an extension ahead have been around for quite a while. And during the past summer pressure was a bit more up with articles here and there and in all languages about a time in near future without champagne for everybody, who is interested. As demand is high, and grapes too few.

The article in l'Union is the first concrete description, I have seen in writing about the big work that is now about to begin.

Long project
The project will then be extended with opinions of experts, possibilities to appeal and presentations of the work for the authorities involved. Only in early 2009 the project can be offically started with the necessary decrees, and the areas involved split in plots for vines. This proces will include new hearings, presentations and so on.

Only in 2017 this new big delimitation - such is the designation of the area of the AOC of champagne - will be finished. The vines can be planted from 2015 if the plan progresses as it should.

The prices will skyrocket
Prices of soils, where the status will change from agriculture to vines, will skyrocket, so the careful proces makes a lot of sense.

Discussions - to use a very neutral word - must be expected, when some will become euro-millionaires overnight, whilst others have to continue with wheat, barley and sunflowers.

The new land for vines will probably be priced in the low end from the start, the expensive end is at one million per hectare. There are only rarely publicly known purchases but about a month ago Just-Drinks.com said, that the house of Vranken-Pommery Monopole bought three hectars at this price.

Land to grow vines for other French appellations are sold at an average of 76.580 euros per hectare.

The communes in the game are:

This argumentation is no longer possible. Historically 56.000 hectares of land were planted with vines in Champagne when it peaked. Today 35.000 hectares are part of the delimitation and only land, occupied by churchyards or lawns, are not planted with vines today. We'll see what the extension to come will bring from 2017.
Indsendt af Sol kl. 11:24 AM