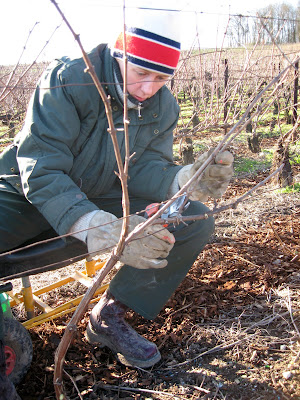 The cordon gets its characteristic shape when most branches of last year are removed.

All vines of Champagne are manually pruned each winter. It is a quiet work of patience, and therefore very suitable for persons, who likes this kind of task. And - according to a vineyard worker here - it is easy to recognize the work of a woman from the work of a man. The female touch is simply more thoroughly, more tidy than that of a man - sorry Alain, sorry Lars - but this is what she says.

An entertaining observation. But when that is said, the objective is also to finish, and not - like myself - to think and think and think yet once again, before you decide where to use your secateur. If you work this way, you will only reach 100 meters further in one day, and this way the winter will be way to short for you to finish on time. But your work will be careful of course, how could it not be?

There are many possibilities when you prune. Despite the strict rules for grapes destined for champagne, there are both big roads, small roads and dirt roads, that will all take you to Rome. But more experience makes it easier to make the good choice faster.

The useful pruning
There are several reasons why we spend so much time pruning.