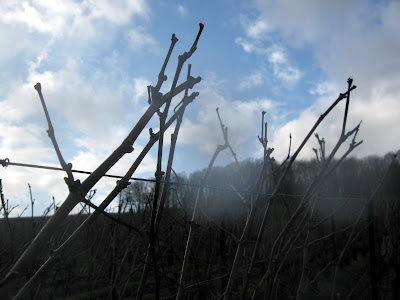 Black clouds and rain over Loisy-en-Brie.

The only kind of weather we have not had this sunday afternoon is what we normally connect with February. Snow.

It has been thorough-paced Danish weather of April. March it is here. One month before as always.

We begin to be a bit uncomfortable with the fact that we are not more advanced with the pruning. If everything is one month early, it is rather interminable to imagine how we can manage to finish both pruning and binding the vines, before they grow again.

Thunder, lightening, hail
Today I had barely put my feet in the muddy grass between the vines, before curtains of a very deep grey suddenly covered the blue skies above me. The dark clouds came with rain and even a quick, little thunderstorm with both rumbling and lightning. 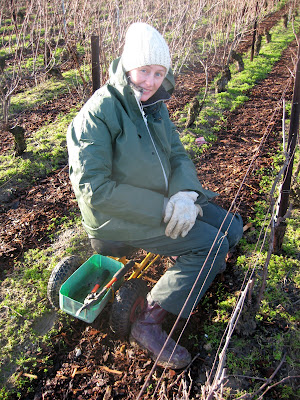 We did see the sun in Loisy-en-Brie as well.

No weather seemed to hang aroudn for long though. The wind at times worked so hard, that it reminded me of the windy days as I know them from the North Sea-coast of Denmark. Generally I don't miss the wind here, but when you are out in it, well dressed, the sound of storm and feeling of wind against your skin is not bad at all. But of course we have to do without the great smell of salt in the air here several hours drive from the sea.

Out in the storm
This life of a winegrower has taught me to appreciate the bold Danish saying, that there is no such thing as bad weather, only wrong clothes. Anyway I am always 100 percent sure that I stand the rain better and longer than Alain, so I rarely risk to be more wet than I can live with.

The storm ended with a load of hail, though of such a low calibre that I did not even feel them glance off my heavy plastic raincoat. This sunday I was sort of more worried about the hunting party that was shooting in the forest just above us. We hear them every weekend this time of year, but I have neither heard their dogs bark nor seen them with their flashy orange waistcoats before. I sit quietly in my dark as a hunter green outdoor wear and feel slightly worried. 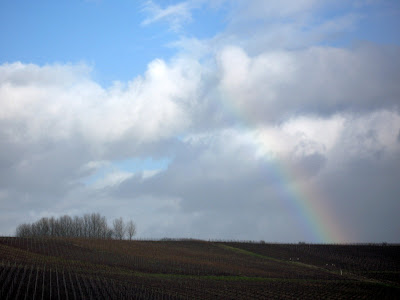 One leg of the rainbow ends in Loisy-en-Brie.

When shine follows rain, the result is often rainbows. What every child knows, I remembered a bit late, so when I began to look for it, it had begun to fade. But a true rainbow it surely was - and I have not seen many in the vines - since we normally don't work under the rain.

After pouring down all night, big amounts of rain was carried from the forest and down the slopes this morning. A great occasion for Alain to check that the ditch he ploughed about a year ago actually works.

It leads the water all the way down till it arrives on the flat piece of land below the vineyards. So now our rows of vines are not eroded by the water like before. Good news of the day. 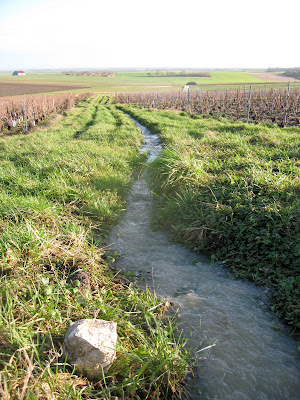 The brooklet that carries the rain water from the forest. Normally there is no water here at all.

So March weather we have, even we are still in the first part of February. We would expect minus 10 degrees Celsius rather than the 10 degrees we had today. Not much to do about it.

But it gets a bit stressful to see how slow the pruning and the cleaning advances. If the vines - as everything else at the moment - is one month early, we hardly have more than a month to finish. With the speed of the guy hired to prune it is a bit hard to see the end of anything.

Mother Earth or as we say in France la Dame Nature couldn't care less, it seems. Even the vines still rest, other crops are much more advanced than usual for this time of year. 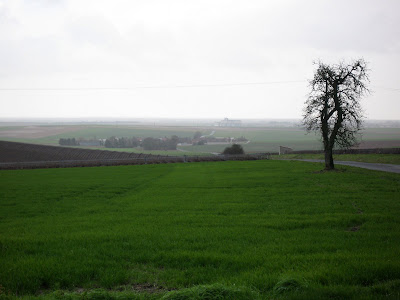 The field in front of the house of my mother-in-law is sowed with winter wheat that is very advanced for this time of year.