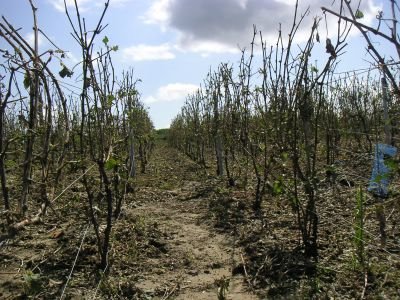 Vines outside the village Thil, Massif Saint-Thierry. Everything is lost in a hailstorm.

The magazine notes, that the capricious weather one time after the other shakes the work and development in the vineyards all through the season until the grapeharvest begins.

Cold, storms and overcast days
To grow grapes means to watch one's step between between the different whims of nature, that can hit you as particularly bad weather, disease or pests. From 2006 I especially remember the coldness of May, the storms of July and the constantly grey firmament of August.

These are the short conclusions of the detailed presentations of the weather of 2006, as they appeared in Le Vigneron Champenois each month last year:

I have translated the texts from the December-edition of Le Vigneron Champenois, a magazine for winegrowers in this area. They are based on local and regional observations and data, that has been taken down by people all over the area and collected by the technical department of the CIVC (Comité Interprofessionnel du Vin de Champagne).

The quality of the yield
We ourselves harvested good grapes. There were enough, and in a generally good quality, with few attacks of rot. The coop, where we deliver our grapes, talk in their turn-of-the-year-edition about good grapes in sufficient amounts in 2006, where especially the quality of the red grapes were high.

The reports on a superiour level - for the entire region that is - are positive, however not that detailed yet. At the moment the first fermentation and processes more or less linked with it are finished, and it is time to do the assemblage - your personal mix of still wines.