Grapes grow in the heat 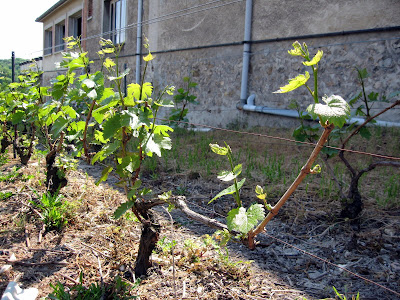 Vine in Verzy, early development, as everywhere this year.

The tiny grapes are very advanced. The generel estimate is three-four weeks earlier than normally. We have been closer to 30 than 25 degrees Celsius, since I returned from Denmark one week ago. The fine weather - despite thunderstorm and rain this evening - seems unstoppable.

This general earliness has been the same more or less since New Year. While we pruned the vines in January, I noticed several signs of spring amidst what should normally be cold and hard winter. Already then three-four weeks in advance compared to the last three years. Longer than that I have not personally checked.

Early grapeharvest possible
Actually grapeharvest is something, we don't start to have opinions about until after the flowering, most years in mid June. But since custom this year seems to be three-four weeks early, it seems more and more realistic that we will begin to look for flowers from the middle of May.

The grapes usually are ready to pick when we reach September 20th. If this moment - as all other events regarding the vines so far - will be early, we can kiss our nice, booked, family-summer-holidays in family-summer-house in Northern Sealand goodbye. We won't be able to stay very many days in August.

By the way the weather has not been measured any better since 1949. 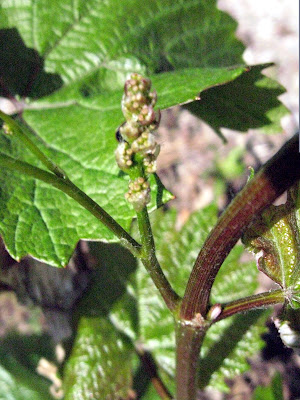 A grape to be as it looked in the middle of this week in Verzy, Montagne de Reims in Champagne.