The buds grow in Verzy 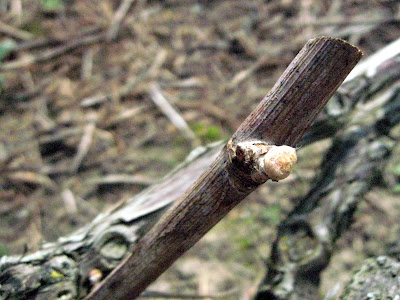 Chardonnay-bud, that has begun to grow. The vineyards of Verzy consists of about 80 percent Pinot Noir- and 20 procent Chardonnay-grapes.

Not even 24 hours ago I wrote that the vines of Verzy so far show no visible sign of growth. Well, that was yesterday. Today they grow.

In the school - of course one of the crossroads of information in such a small society - I just heard, that the buds have reached the fase of growth, where they swell. As the weather should stay real nice a while, I presume, that the plants will be ready to show the first leaf pretty soon as well.

Why it is so special? I mean, it's just another leaf, and they come out just the same each year. Well, I guess it is for the same reasons, people keep reporting to newspapers when this or that kind of tree has the first leaf (In Denmark it is the beech that counts). Here the vine is the most important of the first signs of a winter truly gone. The buds growing and the first leaf coming out carries with it the promise of yet another yield but also the fears of bad weather, insects and disease that may destroy everything.