Express yourself in pink 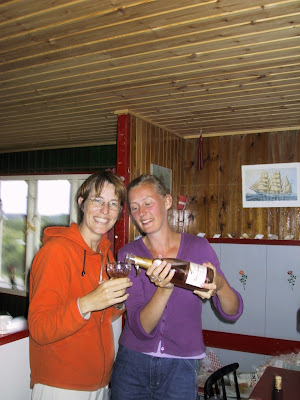 Summerkitch, maybe... but it still happens to be the first time, I tasted rosé champagne, and the excitement just wouldn't leave the house.

Pink champagne is so popular that not even conservative winegrowers can afford to ignore the success of it. The pink beverage now sells 12 percent of the total, which makes pink the second seller amongst champagnes.

Every one out of four bottles sold by an acquaintance in Bergères-les-Vertus now carries either a discret salmon or a more deep pink robe.

Traditionnally the pink has not been too much en vogue here. I remember the first box of pink, that Alain brought to Denmark to enjoy in a summer holiday. Let me just put it this way: It was not excactly his style or choice. But I insisted hard to have it, as soon as it got clear to me that such a thing exists. And the girls adored it. That was in 2001, as far as I remember.

The colour may mislead. Let me just tell you this: Pink brut is as dry as any other brut. This is anything but a sweet candy wine. On the contrary pink often has more body and power than its transparent collegue. Try it with sushi or with a spoon?

The classic rosé is the Billecart-Salmon, that dates back from the 19th century. Laurent Perrier reintroduced pink in the 1970'es. Today everyone with the slightest possibility has their choice of the kinky bubbles in their assortment.
Indsendt af Sol kl. 9:51 AM