Possible model for other AOC's 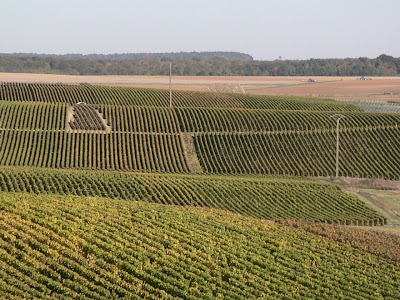 Champagnes little plots are due to the historical development of the region.

Champagne is not like the other wines. The work of growing, making and selling the wines is organized completely different than in the other French AOC's. These - many of them in deep crisis - should allow themselves to be inspired, suggests the newspaper Economie Matin in a theme about champagne, that was published just before Christmas.

In Champagne the vignerons own and cultivate most of the land (85 percent), whilst the champagnehouses make, market and sell most of the champagne (70 percent). With this organization, everybody can concentrate on his strong points, the reasoning goes.

Multitude of AOC's
The other big wine regions of France typically consist of anything from a few AOC's all the way to a multitude of different appellations (Appellation d’Origine Controlée). Champagne has just three: Champagne, Rosé de Riceys and Coteaux Champenois. And 90 percent of the champagnes originate from just 100 big brands from the champagnehouses.

The AOC-system and its many producers can be hard to understand with its many geographical names and producers. It can also be quite challenging for smaller producers to grow the vines, make the wine, market and finally sell it.

In Champagne some of the reasons why the work is organized differently are simply historical. Once upon a time the plots were dealt with by peasants.

Champagnes small plots
Penniless they were. In those days it was not rewarding to grow grapes on the Northern limit of where it is possible at all, on a bigger scale anyway: An annual average temperature of 10 degrees Celsius is the minimum, and here in Champagne we are just above that.

It was the privilege of the monasteries to make the wine and later the champagne. A system that ended with the French Revolution in 1789.

The land that had belonged to nobility and church was confiscated and sold. Not to the poor peasants though, they could hardly afford food and needed every sous they could find to eat. But already established houses such as Ruinart bought land. And indeed many of the biggest houses have established themselves in those years around the revolution. Also peasants with some land could buy. Since then plots have been divided each time heritage was shared, thus creating the tiny almost 300.000 plots of today's Champagne.

The first AOC
Only in the 20th Century - when champagne became the first of about 400 AOC's - it was legalized that only grapes grown in this area could be used to make champagne. But for the small winegrowers it remained more connected with hard work than good money to grow grapes here in the major part of last century.

So for historical reasons the winebusiness is differently organized here, which may-may not add to the success. But if so, champagne is certainly not the only industry, that has made it to the top, by concentrating on its bigger talents and leaving the smaller ones for somebody else.

But I wonder if you can transfer such parameters to other areas. But of course everybody is free to be inspired.