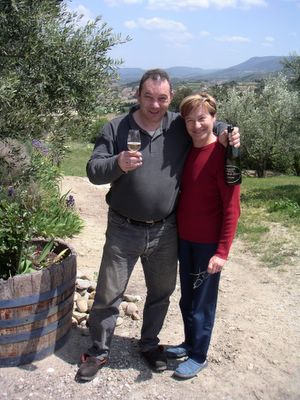 The owners of the Domaine Collin produce Blanquette de Limoux - the oldest sparkling wine in France - the AOC is based in the department of Aude close to the Pyrenees.

The global market cannot get enough bubbly, it seems. During the last 10 years the world market for sparkling wines has grown 4,5 percent each year. Quite opposed to the market for still wines, that has more or less stalled with a growth of only two percent in the last 10 years.

Onivins, the body of wine of the French authorities, explains the popularity partly with the fact that sparkling wines are so festive.

France:
Champagne sold 300.000 million bottles in 2004 which equals a growth of 2,4 percent. Not bad when you compare to the otherwise crises-stricken rest of the French winebusiness. However cheaper sparklers such as the Blanquette de Limoux with a growth of eight percent in France and 10 percent for exports does perform even better. Crémant de Limoux has had a growth of 30 percent and crémant d'Alsace a growth of 21 percent. The Blanquette and the Crémant from Limoux sell well in the States and Great Britain wheras Crémant from Alsace is popular in Germany.

Germany:
The Germans like to drink sparkling wine, most of the consumption however - 81 percent - is covered by the local fizz, Sekt. 17,3 million bottles of Sekt is exported. The biggest producer Schloss Wachenheim has a marketshare of 22,5 percent. The secondbiggest producers are Rotkäppchen-Mum and Henkell-Söhnlein. The consumption of sparkling wine in Germány has currently stalled after a decrease in 2003 of 2,5 percent.

Spain:
The major part (95 percent) of the sparkling wine from Spain - Cava - comes from the Penedes-area in Catalonia. The 215 million bottles sold in 2004 represent a growth of five percent. Freixenet - wellknown Spanish sparkler - produces more than one third of the Spanish fizz (36,5 percent) and Cordoniu with 38,4 percent is well beyond another third.

The numbers are from a special edition of the professional magazine "Champagne Viticole" out due to the annual exhibition of anything related to the champagne and sparkling wine business. It takes place in Épernay between October 19th and 22nd.

** "Traditional method" or "methode champenoise" means that the second fermentation takes place in the bottle like a bottle of champagne. Another and cheaper method is to let the wine ferment the second time in big tanks and later transfer the fizz to the final bottle.