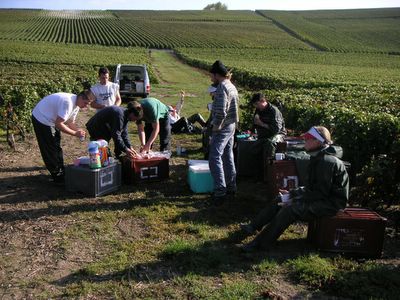 Towards the end the team is well worked together.

After the sixth day of the grapeharvest the two white Cintroëns on top of the 10 pickers contain further five basket full of grapes. They are meant for Michael.

The harvest has traditions of its own, and la Baptême is one of them. Generally debutants will have their trousers wet, as the work lacks towards the end. This year it seems to be grapes rather than water. Even Michael is not the only new member of the team this year, he is by far the one who talks more, makes more jokes and throws more grapes at others than anybody else. Today revenge stretches its long arm after him. So he is finally hunted down on the land across the farm, until he finally surrenders and accepts to have 30 kilos of grapes and another seven-eight kilos carefully jumped into juice down his neck.

Amongst the 11 extra people working here Muriel is the veteran. During 10 years she has come now, and she is also the person, that links everybody else together. Brother-in-lawe, cousins, collegues and so on. Most of them come to work here during their holiday - from jobs such as baker, butcher, worker in a factory. Others are unemployed, and probably dont do other work during the year. Common for everybody is that they enjoy the special atmosphere of school camp and home that you create, when you work, eat and sleep together with other.

You dont get rich from the officiel tarif for the wages. When people like here also get lodging, they will make around 3000 kroner for one weeks work, so few probably come only for that.

It is difficult to get the works needed. The need is big in Champagne, hvor all grapes are harvest manually, and a good picker of grapes can take 500 kilos in a day in an area, that this year has produced 30.000 kilo grapes per hectar. Gipsies from Southern France come here to make the hole family work in the winefields. In the outskirts of each village, you see their caravans and mobile homes, in the early morning, when it is still not daylight, they group at the rows with even very small children that work too. Also people from Eastern Europe are attracted by the work - some in more legal ways than others - which is a reason why la gendarmerie are busy in the roads these days.

The people here all come from Normandy - year after year for many of them - this is work everybody can do - and it creates a certain feeling of belonging not to say of being familiar with each other for at least this one week in the year. I feel the same - I cannot use my knowledge to much at the moment, but I can harvest grapes without any other problems than the fysical. And then I count on understanding a few more of the jokes next year.