A helping hand from mr Frost 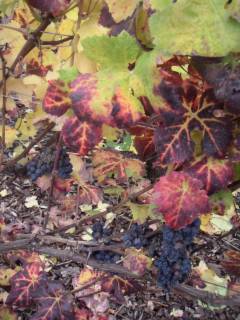 Only frost can make these grapes disappear fast.

The wine is just about to skip its skirts and put the leaves on the floor. In the next weeks we shall see, who has followed the rules from the Ministry (of Agriculture) strictly and harvested everything, and who instead now hopes for help from mister Frost. The leaves come down as the weather cools, but the grapes stay unless the frost kills them before.

This year there were so many grapes on the plants, that only half of them could be used for champgne. The Ministry also decides how many kiloes of grapes you must deliver to the press per hectar. That quota were for us fullfilled after 8 days of work for 12 people, so to cut the rest would take if not another eight days still considerable extra time. A lot of money, so... the grade of strict obedience vary here and there.

On the slopes around Verzy all grapes from the plants following the roads have been nicely cut. The oldest of them probably in the first harvest days, since they now look rather humble as they lie completely dry under the plants. Others have been cut later, so with their sweet-sour smell and faded black-purple colour they are now only entering the terminal deathfase. Further away from the big road and likely controls kiloes of grapes still cling to the branches.

A similar sight you find in those of our rows that never saw the scissors during the harvest. Too many grapes, too little time, too few people. But since the plant may gave a smaller crop next year if it has not at all been harvested, we spend yet another sunday afternoon putting grapes to the ground. That will ease the pruning too, a job that keeps thousands of people here occupied during the winter, since the branches that are cut off normally are burned. That however is not possible if you still find kiloes of juicy grapes on the branches.

We therefor pray for a bit of good strong frost - no less than 3-4 degrees Celsius below zero - to finish the last grapes by freezing them until they explode. So now we on top of the changing of colours, amount of leaves also follow the temperature each morning. So far with our temperatures of more than 10 degrees Celsius mister Frost has to come a long way to be of any help here.