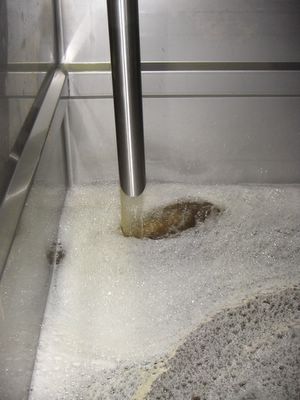 In seven days this grapejuice will have turned into wine.

The harvest of grapes is now completely done. Also here in Verzy we don't see more jeeps with grapes smashed on the front and wineleaves at the windowcleaners. No more grapejuice under our shoes, which is quite nice, since it dilutes the tar on the streets. And no more glances through open gates to the facilities of the neighbours such as presses, tanks, high pressure water machines, tractors and not to forget caves. God only knows how many kilometers of caves we live on top of here.

For us the rest of the process from grape to ready, drinkable bottle with golden paper, bubbles and the whole thing takes place at the cooperative in Vertus. With 220 other owners we have through the 10 days of the harvest delivered about 120 tons grapes for the presses each day.

One pressing - a marc - takes four hours. The grapes are pressed twice through that period. The first one - la cuvée - results in 4100 litres of grapejuice. The second - la taille - give another 1000 litres. This year extraordinary many grapes of extraordinary good quality have been delivered at the coop, that now has ended up with the luxurious problem of having extraordinary amounts of wine. That means that this year the juice from the taille will probably not be used in the final products.

When the pressing is finished the juice is led into tall tanks, where it stays for the next 12-24 hours. As the time passes, sediments will sink to the bottom of the tank. From there they can be pumped out, before the rest of the juice will be led into what in the good old days would have been big, wooden, barrels.

But the good old days in Champagne like in many other places are not what they once were. Forget romantism and imagine instead 24 big steel tanks of 30.000 litres each where the temperature can be kept contantly at 18 degrees Celsius. This is where the grapejuice with some yieldst added will fermentate to wine. Seven days later mission completed. Now some of the wine is ready to be picked up by big champagnehouses, that buy the wine of the coop to blend it with their own.

The rest of the wine stays in the tanks to calm down. Probably not before December the leader of the cooperative, who is also the oenologist, Laurent, will with the owners taste the new wine and get an idea about its future destiny. A champagne must always taste the same, if it is not the case from nature, you must help it in the right direction, which is done by blending different pressings and years. Only the Millésimé-wines - the best years - are not blended. And so far it seems that 2004 will be one of them. We will know more in December.