Right movements of the remuage 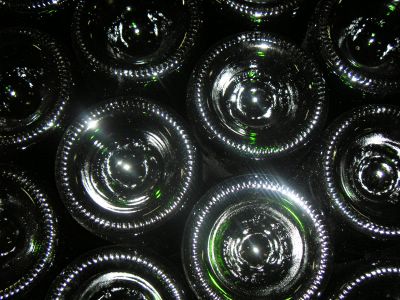 A pallet of champagnebottles turned upside down

At the earliest 15 months after the still wine had yeast and sugar added before being poured onto the bottles, it has fermentated for the second time - the bubbles have been created - and the wine is now anything but still. It has transformed itself to a real bottle of champagne, but before it will be dressed up for the party with gold foil and label, the leftovers from the yeast and chemicals must be removed, and the temporary capsule replaced by the real cork.

An interesting proces, since the carbon dioxide, that has developped in the bottle as the yeast has consumed the sugar, has created a pressure, six times stronger inside the bottle as on the other side of the thick glasswalls.

This pressure is what makes a bottle of champagne come off in a burst of bubbles, if you shake it before opening. Just think about Tour de France, where the winner year after year takes a bath of bubbles on the Champs Elysées as the reward of the endured hardships of weeks. And of course the customers decide how they want to make use of their bubbles. The producers prefer, that the expensive drops stay inside the bottle, until it is sold.

With time and talent advanced methods have been developped to secure this.

A little movement each day
The leftovers from the yeast are heavy and sticky and on top of that they make the champagne cloudy. Which is why they must be removed. However the leftovers are glued to the walls of the bottle, and therefor not that easy to get hold of.

You cannot simply shake the bottle, it could take off, and then all your hours of work would be wasted anyway. Instead the cavists in Champagne a couple of hundred years ago began to riddle the bottles in a certain systematic way. This proces is called remuage, and it was invented by the yellow widow Clicquot-Ponsardin herself and her cavist in charge. 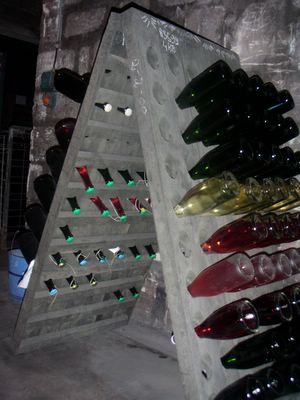 The pupitre is mainly decoration today.

Basically you turn the bottle a little bit each day in a certain period of time and in a certain way day by day raising it a little bit more than yesterday until the bottle has been turned almost completely upside won. These delicate movements will make the sediments at last collect as a plug in the bottleneck. This plug is removed during the process called dégorgement, which is described in another piece.

Doing the riddling is a particular job, it is le remueur, who is the artist behind it, and the pupitre is his keyboard. Wearing his white apron he stands in front of his pupitres. Big pieces of wook with holes, cut in such a way that you can puc a bottle into it and day by day rise it to a more vertical position. You must imagine these pupitres standing shoulder by shoulder in endless long rows through the broad and long chalky caves in Champagne.

Le remueur turns the bottles with both hands, either to the right or to the left. On the footing of the pupitre he records the direction with a piece of chalk. Depending on time and tradition he will rotate the bottle one fourth, one sixth or one eighth. And it must be moved like this twice its own circumference before the leftovers have been collected in the neck. The proces can endure from three weeks to a couple of months. The better the remuer, the better the final result. It takes time to learn the correct twist in the wrist. And only then you can manage the up to 60.000 movements in a day, that several of the grande marques claim their
remueurs can handle in a day.

Modern times however also have arrived in Champagne. The vinification is not covered by the same amount of rules as the growing of the wine, which means that modern methods often are used in the production part of making a bottle of champagne. This development has been taken pupitres in droves up from the deep caves and out on villagestreets and housewalls, where they are used as flowerframes. The gyropalette has taken over the riddling. 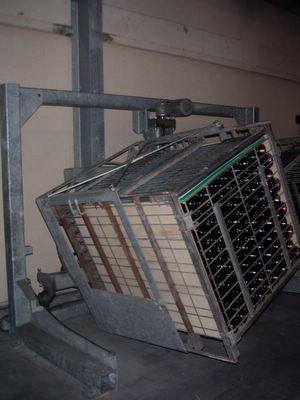 The gyropalette contains around 500 bottles.

Automatic riddling
In the gyropalette you put your pallet of 504 bottles, you programme it, push the start button, and then the entire thing is riddled and shaken in less than half the time of the old days. Without any human intervention apart from taking the pallette in and out.

It works gently and yet precise, and it works around the clock, weekends included and without extra payments. On top of that add a great savings in terms of space, since the gyropalette makes the endless rows of pupitre superfluous. 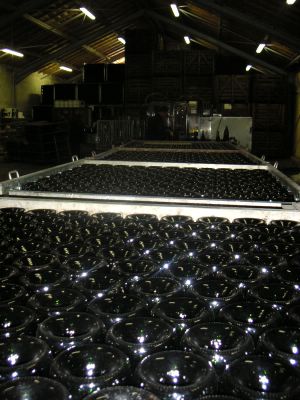 A team of bottles ready for plugging (dégorgement).

Undeniable, computerprograms and pallets do not posess the same romantic appeal as big, white aprons, the quiet rattling of the bottles and the quite right twist of the wrist, which is why the skilled trade of the riddling is still exercised. Several grande marques still riddle their special prestige products manually.

But also the smallest companies still work manually. Husband and wife with a turnover of 10.000 bottles per year of course cannot write off a gyropallette. Some choose to join others in a cooperative, others keep going the manual way in their own small caves. 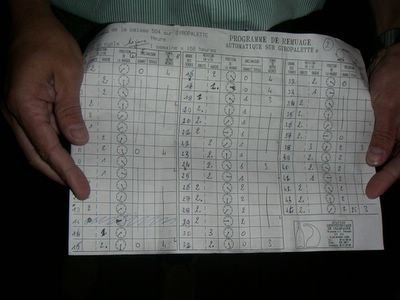 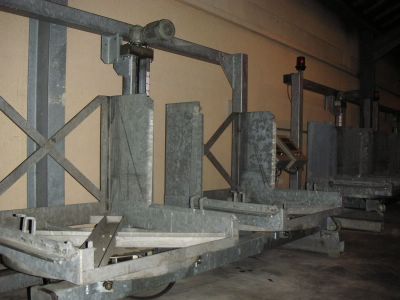