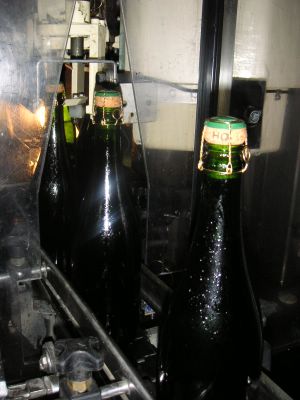 Cool bottles with their new cork and muselet.

Champagne spend the storage time wearing a temporary capsule. This will be replaced with the real cork, before the champagne is dressed up and leaves its cool caves to be sold.

At the same time you remove the plug of yeast leftovers and sediments, that has been formed in the bottleneck after the turning of the bottle according to the established pattern of the remuage. Whether done manually or with a machine.

The actual changing of the cork is called dégorgement. For bigger champagne-businesses this today is mainly done with the help of machines. But smaller husband-wife-companies with a production of a few bottles per year still change the corks manually. 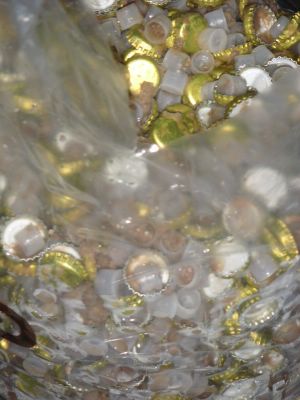 The temporary capsules with their plugs of yeast and sediments.

Basically you pull off the temporary capsule with a special opener. The capsule has a kind of plasticcontainer on the back, which will collect the waste after the remuage. After that you tap the cork and fasten it with the thread of wire - le muselet.

To change the capsule manually - a la volée - require certain manual skills. Obviously, you must work fast, so you do not waste too much of the precious content of the bottle. The pressure is six times stronger inside the bottle than outside, so the bubbles are indeed very much attracted to the freedom on the other side of the sturdy walls of glass. On the other hand you also must not work faster than you are sure, that all the sediments will leave.

With his tool le dégorgeur tears off the temporary capsule. The difference of the pressure will expel the plug of sediments and yeast. With a thumb covering the mouth of the bottle he will prevent as many of the bubbles escaping as he can, until the final cork is secured with the muselet. Depending on his abilities and experience a dégorgeur can put the cork on between 400 and 800 bottles per hour.

Liqueur de dosage
A few of the drops - around a centilitre or so - not even the fastest dégorgeur is able to prevent from escaping. Which then on the other hand creates just enough space in the bottle for a little liqueur de dosage: A blend of normally the same still wine as the champagne is made of and sugar or cane sugar.

This is the last chance of the mixer to adjust the sweetness of the champagne. Champagne is so northern that it geographically is almost on the limits of where you traditionally have grown wine on a major scale. The wines from the area are often acidic, because the grapes get less sun than those from more southern areas. On top of that the bottles do not contain even the slightest bit of sugar, because the yeast cells have eaten it all during the second fermentation. And since even a dry champagne - brut - contains up to 15 gram per litre, it is necessary to add extra after the second fermentation. A sweet champagne can contain up to 50 gram of sugar per litre. And be careful, because it is called sec, which could make the beginner confuse it with a dry one.

Automatic plugging
All in all more than 300 million bottles of champagne were sold last year. With a production of one million bottles per year our cooperative certainly belongs to the middle size producers. Obviously bigger then the many man-wife-brands but a dwarf in comparison with grande marques such as Veuve Clicquot and Moët et Chandon. And since you can deal with the dégorgement with a yearly turnover of a million bottles in three weeks per year, it is not at all enough to invest in your own machines. In stead a team with mobile machinery arrives each of these weeks to deal with the plugging.

The first week of March the machine and its team of seven-eight people is working steady and stubborn greatly accompagnied by the rattling sound of the bottles, "pops", "bangs" and off you go. First station is a rather chilly bath. 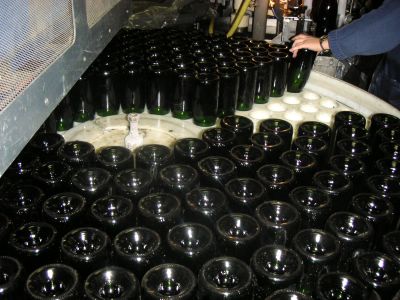 The bottlenecks get a cold bath at minus 25 degrees Celsius.

The bottles arrive directly on the pallets from the gyropalette with the neck and the plug of yeast pointing vertically down. Keeping this position they are liftet to a rather chilly bath of halfway arctic temperatures. Minus 25 degrees Celsius is the temperature of the solution, that the bottleneck is lowered into. A stay that will last long enough for the plug of yeast to freeze to ice.

The next station is the automatic pluggin. The icy bottlenecks meet la dégorgeuse. 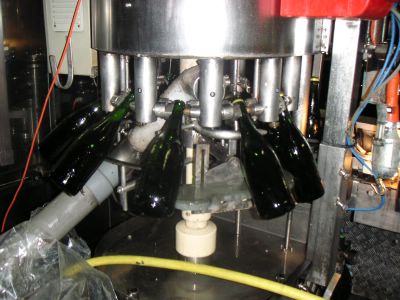 Via a tube the iced yeast is brought to the plasticbag in the left corner..

La dégorgeuse do excactly the same proces as her manual, normally male counterpart. She handles the bottles one at a time. Raises them at the neck from the production line and into a kind of carousel, in which the bottles are tilted slightly one by one in front of the décapsuleuse, that removed the capsule.

The difference of the pressure lets the iced yeast go off in a festive and fizzing "pop". The efficiency of the different carousels vary a lot, but normally you can count on dealing with at least 2.000 bottles each hour. A great deal more than the craftsman of the old days.

The sweetness is balanced
When the plug og yeast has been send off, the open bottles are put back on the production line, where the ratlting roll on to the next station: Dosage. Almost puzzling the rest of the bubbles stay in the bottle. Due to the arctic effect. Even it is only the bottleneck that has literally been dipped into minus 25 degrees Celsius, the chock of this utter coldness has fed into the rest of the bottle, and its content therefore remains nice and quiet during the entire process. 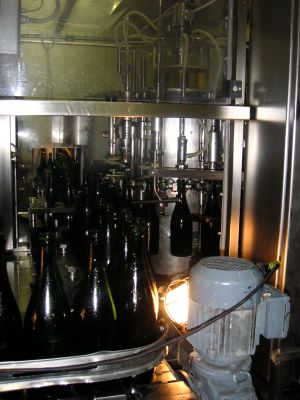 The blend of wine and sugar is drawn off to the right.

Even the loss of champagne is minimal during the plugging, it is still there. The lost centilitre of bubbles will be replaced with a blend of still wine and sugar, the liqueur de dosage. This gives the mixer a possibility of adding a last touch to his wine by chosing the still wine and adjustning the amount of sugar. The wine however will often be the same as the one the champagne is made of.

Sugar, may now ask the unconsecrated reader, at first surprised and then slightly deterred, since today most people by far prefer the dry to the sweet champagne. 92 percent of the sales are the dry brut. However even the brut contains a bit of sugar - 15 gram per litre - and since no sugar is left in the bottle after the second fermentation it is necessary to adjust the sweetness after this proces.

When the champagne has the right taste and contains the number of centilitres it is supposed to, it gets the real cork 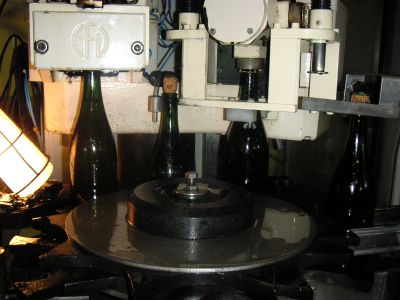 This time the cork is to stay, it is secured with the thread of steel and capsule at the top. The latter is a great collectors item here, since the producers are smart enough to change the capsules with the years and qualities.

The bottles travel through another machine, where a kind of ram pushes the cork down the bottleneck and another one secures the muselet.

Thus plugged as it should the bottle of champagne must endure being shaked in all directions in order to blend the bubbles with the newly added sweet wine. A kind of rocking mechanism turns the bottles in all directions, before they once again are send out on a long row in the last bit of production line. 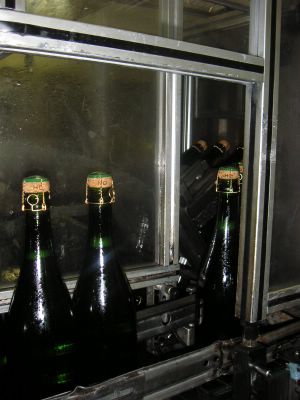 The onlu thing left now is to pack the bottles in boxes. Not the final ones though, because the iced neck is not yet ready to be dressed up in gold foil, and before this has happened the champagne is not yet ready to waltz out to please the entire world. 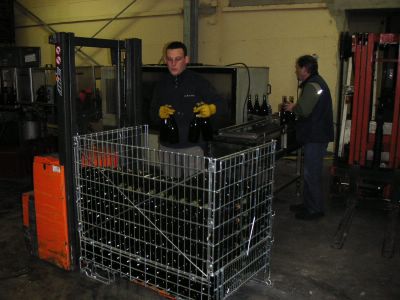 The bottles are lifted off the production line. 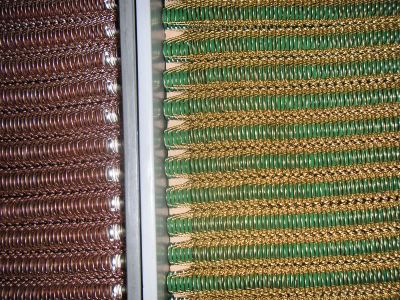 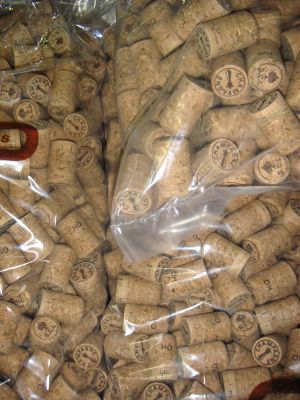