Busy times in the wake of miss Thaw 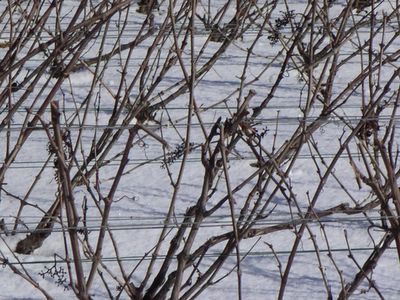 Some wine has not been pruned yet. Now it is time to speed up.

More hours of daylight have lengthened the daily activities in the vineyards around us considerably. Both in the Montagne de Reims and on the road through the Côte des Blancs apparently endless quantities of soiled vans of the brands Renault, Citroën and Peugeut are parked along the rows.

Their content of khaki-coloured and winterwrapped wineworkers begin around 9 AM, and nine hours later many are still there. Not even during the two holy hours of lunch between noon and 2 PM, do they consider to follow their bellies.

Even if it is not more than two weeks ago that king Winter began to shake his quilts thoroughly over Champagne day after day, hardly anyone considers it as more than a bit of playing to the gallery. Then sun is to warm, it freezes to little. Five days ago the snow spread in in a thick and soft layer all over Montagne de Reims. Today we do not even have to remember our rubber boots when crossing the rather water-carrying gutters of the streets of Verzy. The snow is gone, the water is gone. Spring is almost here. 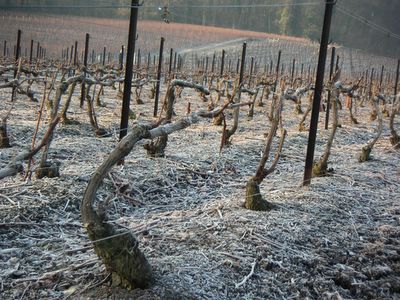 Pruned but not attached: Hoarfrozen Pinot Noir at Verzy.

The official completion dates of the French seasons are the equinoxes. The next will arrive in less than two weeks, and now the wine can wake up whatever day.

But before it better be both pruned and attached to the wires, which means that the deadline starts to flash rather red for several of the jobs in the vineyard during the winterseason.

According to the theory the wine heals better, when the latex has started to mount. The later the better the pruning. You wait as long as possible doing the job and therefor get incredibly busy in the end. Right now. 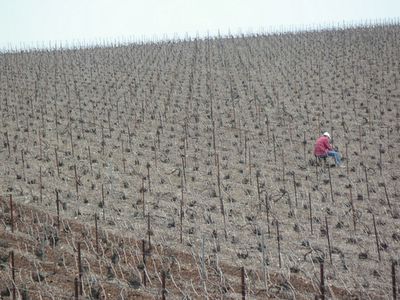 Attaching the wine is timeconsuming too.

Another timeconsuming job follows the pruning. The branches that have survived the pruning must be attached to the wires, each branch with the correct amount of attachments accoring to the AOC-rules (Appellation d'origine controlée).

In the Côte de Blancs they sit shoulder by shoulder in row after row on their low benches with wheels so heavy that they rather easily can push their way over the cover of brushwood without rising. Here in the northern slopes of the Montagne de Reims' they are not as far. Here the main task is still to prune.

Last year the wine produced so many grapes that probably noone remembers ever to have seen anything like it. This year the plants have been left in peace as long as possible in order to give them a chance to recover after the splendid performance. Which is another explanation why the pruning this year has been so late. 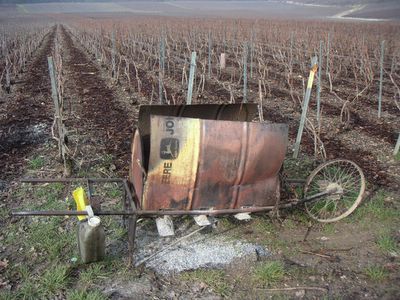 The special wheelbarrow made of an old oilbarrel.

This is why you even in the milder Côte des Blancs also see the merry little bonfires steam from the wheelbarrows. It is the cut off branches meeting their last obligation: Helping the wineworkers with their scissors and eagle's beek keep warm

Whether the guy, we met the other day on the road through the Côtes des Blancs-village le Mesnil sur Oger with his capuche covering all of his forehead and a rather hideously smelling fire in the wheelbarrow behind him, was going back for lunch or just changing wineyard, is not easy to know. But the sight most certainly 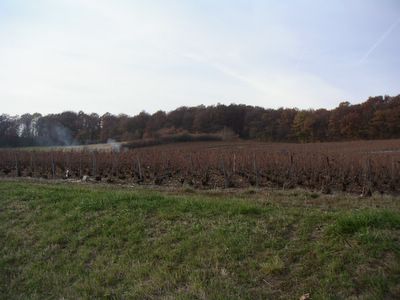 Blue columns of smoke from burning the cut off wood rise all around. 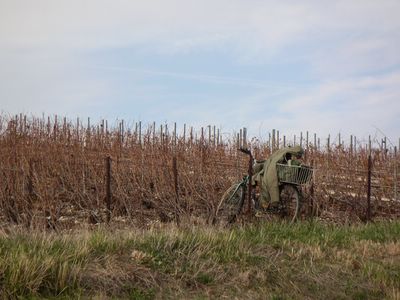 CBicycles are rare on these road with sometimes alphine rises. 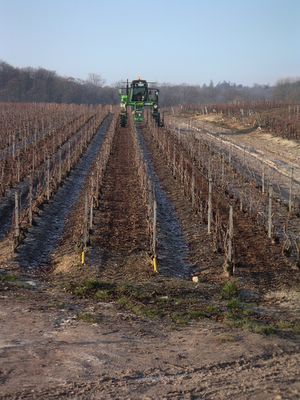 The tractors are busy again spreading chemicals or brushwood.