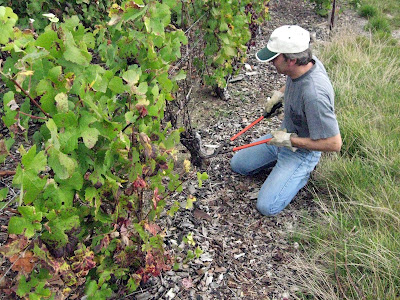 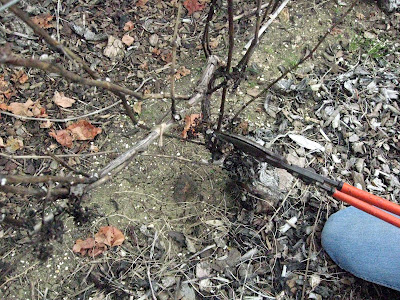 Alain removes all branches, only the bottom of the foot remains.

After the grapeharvest we now enjoy the most wonderful Indian Summer. Twenty something degrees Celsius hang in the rows. On top of that the leaves now show the most beautiful autumn colours you can imagine, butterflies fly around and snails hang on to the leaves. It is simply impossible not to feel content about working under a September sky so clear and fresh and blue.

We just follow the trend: Big coloumns of smoke in the areas of Montagne de Reims and Côte des Blancs show, that many others also have begun their cleaning, even they have just finished the grapeharvest and would normally rest a bit of time. But the weather is too good not to work as it is almost a party to work outside in the vineyards: Leaves and branches are dry right now, and the grapes not yet very rotten.

Removal of disease
The work is to cut off all the branches of diseased vines and make a big heap of it all somewhere away from the vines. Quite a few the diseased plants have already lost most or even all their leaves. They are easy to recognize on their rather fragile look, so different. The vines, that are well, right now look so swell with their burnt colours, leaves covered in pretty nuances of red and orange. The removed branches will be left to dry, and burned later this autumn. 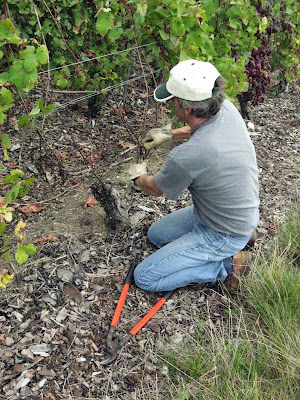 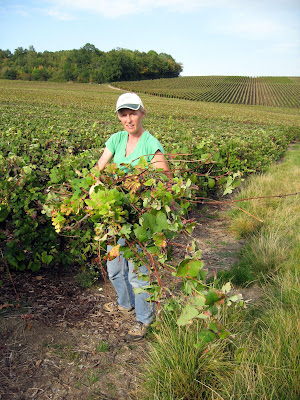 Cleaning up makes you walk quite a few kilometers, since we have around 30 routes of 200 meters each in this plot.

Alain cuts off the branches, I carry them either up or down. The foot and the roots are left as they are for the time being. We would need a tractor to remove just parts of the roots. But to get rid of the diseased branches is already good. Like this we at least avoid to spread the disease esca further, when by mistake the touching of an ill plant is followed by that of a healthy one.

During one afternoon we manage to clean half a hectare. The plan is to deal with the other half in one week. We expect it to be much worse, and hope for the help of Alains's nephew.
Indsendt af Sol kl. 9:45 PM