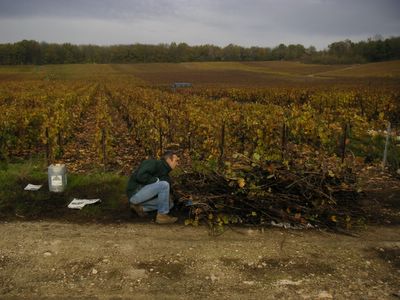 We burn infected brushwood on site to avoid further spreading of the disease.

Like many other winegrowers we are troubled by disease in the vineyards too.

This autumn we have removed about 200 infected plants, which is a great deal more than last year. Actually it is so many that we will have to replant in spring. Normally you do not replant before you change all plants in a plot, but of course if you have to take too many plant out of production you may have to change some even it is not due time.

In the end it is a trade-off. As long as you can easily meet your quota of grapes there is no point replanting. However you have to be a bit on top of the situation as it develops since a plant only reaches its full potential in four years.

Infection spread at harvest time
The spreading of the disease is caused by people. Each year during the grape harvest, when many persons work fast, they spread infection too, when they touch first an infected plant and next a sound one. The only thing you can do to avoid this is to remove the infected plants before harvest time.

The task is a bit more important for us than before, since we this year have more plants with disease than last year. Probably because we two years ago - first year with baby - never made it to the vineyards to remove infected plants. With a negative effect the following grape harvest it seems. 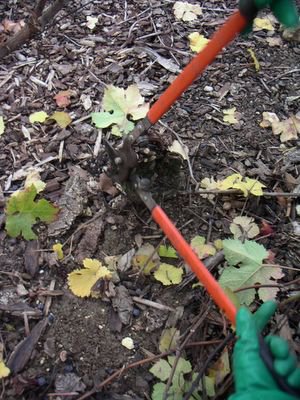 The big scissors cut just about everything but the roots.

Last year we removed infected plants too, and since we have done it again this year, we hope to see the problem dammed in. But we will only know next year on the number of plants with little leaves and poor grapes.

Our situation anyway is not that extraordinary, says the guy, that does the tractor
works in our plots. He performs the same kind of tasks for other winegrowers, where the situation is similar to ours. Driving through especially the Côte des Blancs we can see many plots with the same sad appearances of infected vines.

The first one we can manage ourselves in one weekend. Alain cuts off all the branches at the infected plants and as much of the root as is possible with the big scissors. And I carry the brushwood through the rows to burn it at the side of the road.

Later in the winter also the root, that is as much of it as you can, must be removed. You need the pull of a tractor to do this as a vine has roots that are several meters deep. Of course you will have to remove as much as you can. 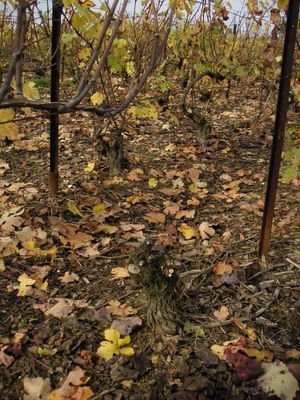 A stub is all that is left from this infected vine.

Cooler days have come to us. But the weather is not yet cold enough to make the big flocks of starlings migrate further south.

We hear the flapping of thousands of pairs of wings, as a huge flock change plot. They pass 20-30 metres over our heads. Do not stand under such a flock, the locals say, but what can you do in the vineyards when thousands of birds collectively choose to move. After all they cover quite a considerable amount of square metres. Alain however is happy that the bird directly over him only only has pee to provide