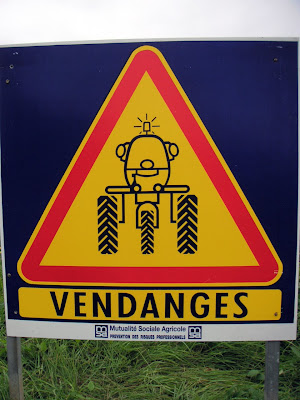 Special signs warn about lots of tractors during the grapeharvest. The effect may not be great since some of these signs are left all year round.

The objective of the vines has changed. From raw and pure growth, it is now all about ripening the fruits. After the consolidation of the plant, the focus moves to the future: The offspring. The grapes have begun to change colour, and with a ripening that normally endures about one month, it means a very likely start of the grapeharvest of 2007 on the other side of August 20th.

In the latest bulletin from our cooperative the president expects to begin in Vertus around August 22nd, so we will most likely begin on Saturday 25th. Loisy-en-Brie normally begins three days after Vertus.

Still early grapeharvest
It is later than the first expectations of the CIVC, but still the earliest I have experienced in six years. 2003 was very early too, but the circumstances were different. A heatwave of five weeks made it necessary to harvest before the schedule within days, because the grapes matured much faster than anticipated. The grapeharvest in Champagne normally takes place around September 20th.

It is the CIVC, that decides the dates where each of about 320 villages in the Champagne-district can begin. The final dates will be published two weeks before.

Summer vacation coming up. I am off from vines, grapes and blog for some weeks. I will be back sometime in late August. Enjoy summer best way possible: The bubbly way!
Indsendt af Sol kl. 4:18 PM