Fill up the bottles (tirage) 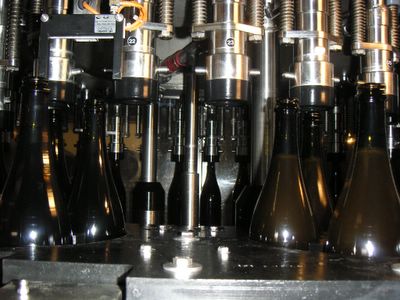 Fill up the empty bottles, tirage at the cooperative in Vertus.

A still wine becomes sparkling after having gone through a second fermentation.

The six months after any grapeharvest is spent turning the grapes into wines or crus. This may refer to plots or villages, it depends how many base wines you have or want to keep.

These crus are blended criss-cross the villages and grape varieties and even years - reserve wines - to obtain the taste already defined as that of the house of that particular champagne. Since the grapes vary within different years, so does the proportions of reserve wines. This is the unique way you create champagnes. The mix is named the cuvée, which already sounds nice, doesn't it?

Into the cuvée is added the liqueur de tirage.

The yeast and the sugar
This liqueur is a mix of yeast, sugar and - in our coop anyway - bentonite. This is a mineral, that makes the dead yeast glue together, which in the end makes it easier to remove it all from the wine (Read Remuage).

Together with the sugar the yeast make up the chemical motor, that starts the second fermentation. The yeast, that is not able to breathe in the closed bottle, eats the sugar - this is in fact the second fermentation - to survive, which develops the alcohol and carbon dioxide along the way. Finally, when there is no sugar left, the yeast dies. This process is called the prise de mousse, birth of the bubbles, or more correctly the carbon dioxide, that will develop the bubbles when opening the champagne. 24 grams of sugar is used per litre of wine to end up with a pressure of six atmospheres inside the bottle. The process takes a few weeks.

To add yeast and sugar is a method, that was developed and based on the works of the scientists Louis Pasteur and Jean-Antoine Chaptals works. These two men were first to explain how sugar and yeast works, when grapejuice fermentates into wine.

Tirage on the go
Tirage takes place several times in a year in our coop. Each time a company arrives with their transportable production line with a number of work stations manned with skilled staff.

They lift the bottles in one end of the line, and the bottles therearfter move on to the following station, connected to a tank, that contains the cuvée. This is where the bottle is filled up. The next work station adds the liqueur and finally the bottle is closed with a temporary capsule. It reminds me of a big beer bottle cap, but it is bigger and on top of that equipped with a plastic container on the back, that will be used at the time of disgorging. 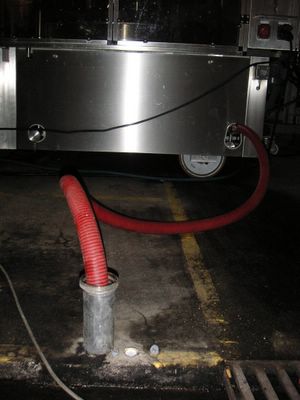 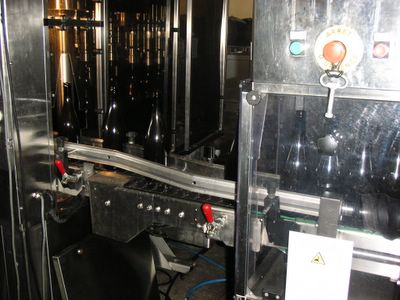 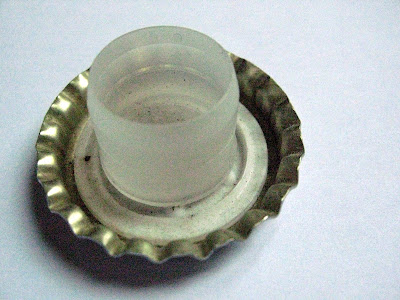 The still wine is sucked from the tank, put into the bottle together with the liqueur de tirage and is finally closed with the temporary capsule (bidule).

When the time is up for disgorging the bentonite- and yeastmix will glue to the plastic container as a stopper after the proces of remuage.

Pleasant conditions
However this is only the case as long as the carbon dioxide is in the chemical company of the dead yeast. They chat in these nice conditions - peace and tranquility, darkness and cool air - and this develops the characteristic taste of yeast, that a real champagne must have. This is where the development of the tertiary aromaes, that you only find in bottles that have been allowed to mature, takes place. More time sur lattes, will add more complexity in the champagne.

This is why there is usually no reason why you should store your champagne to let it mature at home. When you buy it - in a wineshop or at a winegrower - the important lees is long gone (read Disgorging).

After the tirage the people move on to the next place with their machines. In Verzy I can hear when the neighbour does her tirage. On days where bottles moving on lines make more noise than the birds of the forest, and where lorries that deliver bottles must crawl through our very narrow street at the pace of a snail are the days. Even it's a lot of sound, it's a merry one, so I'm fine with it. 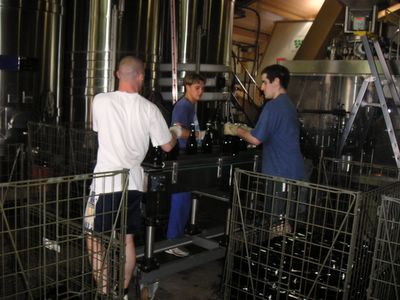 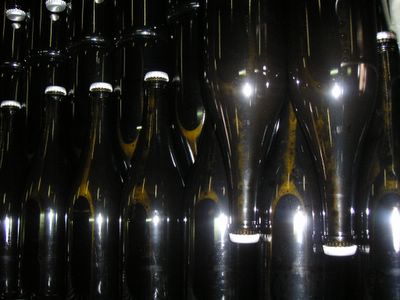 Three men lifting bottles to keep up with the pace of the line.
Indsendt af Sol kl. 11:16 PM