Take the TGV to Champagne 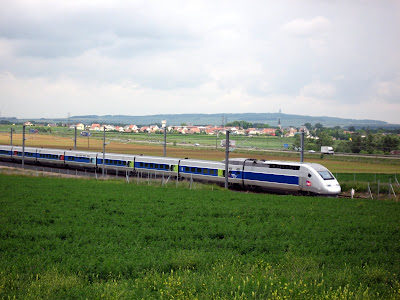 The TGV train passes Beaumont-sur-Vesle below Verzy. The speed of the train is an impressive 320 km/h on the new Est-distance, 300 km/h in the rest of France and 250 km/h in Germany.

TGV Est is now a daily reality. A train ride from Paris to Strasbourg now takes two hours and 20 minutes, with the ordinary train it takes four hours. The fastest connections between the Paris Est-train station and downtown Reims are down to 45 minutes, which is half. You may also take the TGV train directly from the Charles de Gaulle airport in Roissy outside Paris and with the fastest connections reach Reims in half an hour.

So the tourist industry is happy. A lot of French may not know where to place the Champagne region, where the much more known beverage with the same name is made. But le comité régional du tourisme (CRT) de Champagne-Ardenne has ensured not to end up in the unpleasant situation when it comes to British journalists specialized in life style.

Welcome to the British
The British market is the biggest for champagne exports at all. British tourists bought an impressive percentage of 40 of all sleep-overs in this area last year, and they are eager to receive even more.

The tourism industry of Marne anyway let their good will accompany by action. Last year British life style journalists were invited to the Ritz in London to enjoy a meal, composed by the chief of Reims-based threestar restaurant of Les Crayères, and accompagnied by top champagnes. Too bad that I did not make it into life style features, written in English in time ;-)

Final destination Berlin
The major part of the first passengers of the TGV Est were probably French. They tested the new waggons with design by Christian Lacroix last sunday. Now we all wait for heaps of tourists for the approaching season here in the department of Marne.

The plan for the new fast train is to extend it all the way to Berlin. So far the German cities of Frankfurt and Stuttgart are connected. It is no secret, that I liked these perspectives of easy transport to the big centres of Europe very well, when we bought our rural idyll in Verzy some years ago. We have a drive of just 20 minutes to the nearest TGV-stop in Bézannes. Anybody up for a house here?
Indsendt af Sol kl. 11:09 AM