Quota of records in ditto year 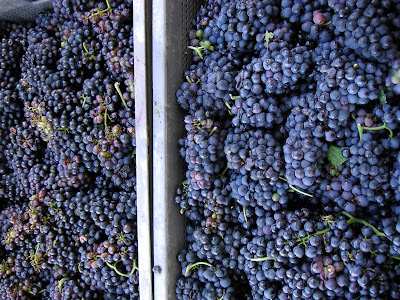 Two thirds of the grapes in Champagne are red Pinot Noir and Meunier.

The professional organization of champagne, the CIVC, has suggested a harvest of 14.000 kilo of grapes per hectare, and winegrowers and champagnehouses so far said only ok and yes please. In 2006 the similar quota was 13.000 kilo per hectare. So it is a decent increase, that reflects the need for more grapes to satisfy the global thirst for champagne.

Quota, I beg your pardon
This quota now and then is the subject of some wondering, sometimes some people are even amused, especially when they are not French: "Sorry, you say, you make champagne, and that you don't use all the grapes you have?"

"Excactly, We pick the amount of grapes, we are allowed to", is our answer. The rest, if there is a surplus, is left to rot on the vines.

French people find regulations, orders, laws and instructions of such very necessary. When I ask amongst friends and family anyway. How would you otherwise govern such an anarchistic population on just a basic level? When winegrowers can only sell or make champagne of a certain number of kilos of grapes, they have no interest growing extra. The hard pruning performed here gives healthier plants, less and therefore better grapes, which eventually results in a better product.

Reserve is part of quota
A key question may be, whether there will be enough grapes to reach this quota of records. We still don't have the final answer whether the pollination in our plots has been good or not, but both where we are and here in the Montagne de Reims, winegrowers keep an eye on millerandage (grapes with berries of very different sizes). It is a phenomenon, that is an unpleasant possibility after the kind of very-changing weather that accompagnied the major part of the period of flowering.

Great all in all. But least for new winegrowers like me, who not yet have access to the special blocage/deblocage of 1.600 kilos of grapes. Now, it is not likely, that there will be fruit for it in my plot anyway, so it is not that hard to get by.

I would probably not be very impressive on my own trying to block one of the gates of the city of lights with - let's say - 10 ton of stems, removed from the vines. (Since I will certainly not have enough rotten grapes.) And I certainly don't have the right temper for this kind of actions either. So I might as well hope, that the hard pruning of the vines this year has given the power injection needed for the plant to have more fruits next year. And in 2008 I expect to have obtained full rights as a winegrower.
Indsendt af Sol kl. 10:54 AM