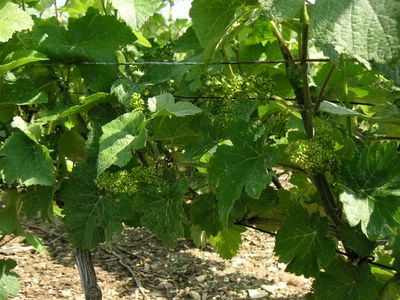 The vines in flowers in Loisy-en-Brie.

The vines are flowering. It is a rather insignificant affair, at least if you imagine something like the sumptuous white splendour of a apple- or cherrytree in spring. The flowers of the vines you will hardly notice at all unless you enter the rows and dig under the big leaves to see for yourself.

Now the most important of all is that the weather will relax and remain nicely quiet and warm like during the last two weeks for at least some days more.

This will allow the pollen to stay where it should be, around the flowers, so as many as possible of the little grapes-to-be can be pollinated and then develop into grapes.

Season of thunder is on
On the northern slope of the Montagne de Reims, where we live, we have already had the first thunderstorms of summer with both thunder and lightning and heavy showers. The next is forecasted later today. 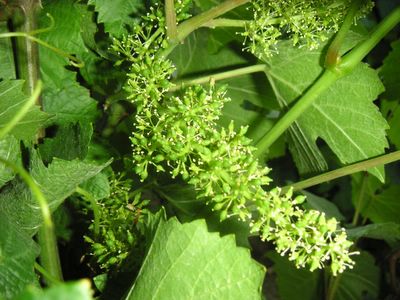 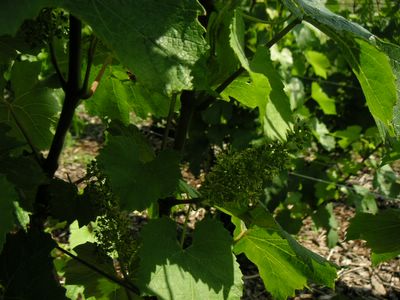 Here however the flowering has probably begun some days before in our fields in the far end of the Côte des Blancs. Our Meunier are always some days later than the Pinot Noir dominating these soils. So the possible rain may not matter so much here. In our vineyards we would like to avoid rain for another few days though.

A vine pollinates itself, but it demands silence while working. If it is too windy or too rainy, the fine he-pollen, that is supposed to pollinate the she-flower, will be washed or blown off. This will reduce the pollination and the final yield will not be as big as it could have been.

But like frost in spring or extreme cold weather in winter, we cannot do much about it. We have to live with the moods of the weather just like any other with a living dependant on nature.

Almost like last year
Funny by the way to note, that despite the very cold spring we have had this year, the vines are still in flowers around the same time as last year.

I do not know the excact number of days, but I do remember that I last year had a walk in the vines at Verzy with a Danish friend a few days before Midsummer, and at this occasion we saw the flowering vine as well.

So the flowering cannot be many days later this year, even it seems incredible when I think about the many cold days in March, April and the major part of May.

Which should imply that we can expect to harvest the mature grapes in the last half of September just like last year. The flowers may be a few days later, but there has been many discussions where the vendange were begun some days too late last year, so I wonder if not the authorities will be careful this year when they decide the dates. 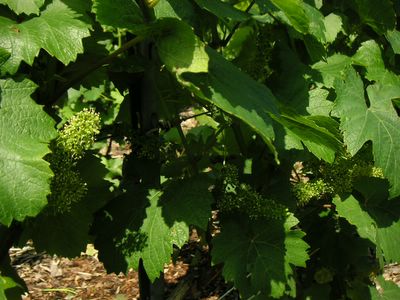 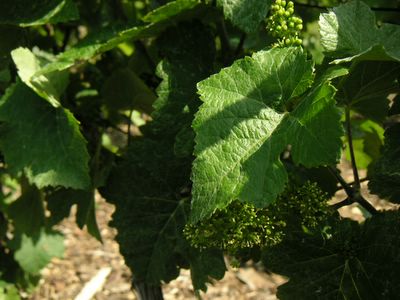 The new stems on our vines have not grown quite enough to do the second and last lifting of the wires and the final palissage yet. It is only a question of growing a few centimetres more though. This means that in a few days we can expect that it is time to finish this part of the tasks of early summer. Which is good, because being tied up protects the fragile stems against the violence of the thunderstorms, that also come with summer.