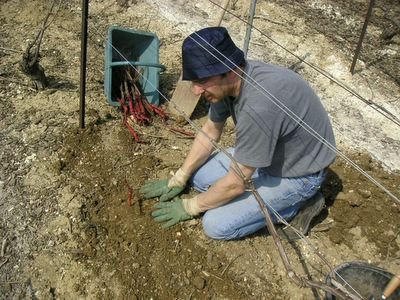 Alain pats the soil around a young plant, that will be only fully produktive in four years.

The weekend is over, and the balance is 150 pieces in the ground. That is, 150 one year old young Meunier-vines now have new soil under their feet. Hopefully for many years, since there is a long perspective regarding time when you plant vines.

Thus we take care of vines, that were planted by Alains father, grandfather and uncle back in the sixties, even before I was born. In the past wonderfully warm and pleasant weekend of April we have for the first time planted vines together. Maybe Clement or our next child will care for them once.

Even my roots are not in Champagne - not yet anyway - it is still something very speciel to plant new life, that will probably will survive yourself. The very thought pleases me. It also means, that it pays off to do the job well. Thoroughly. 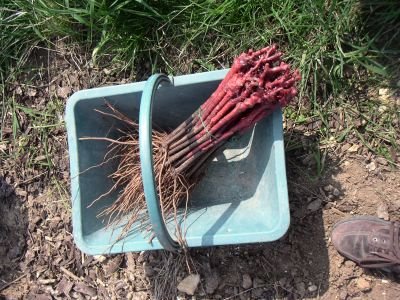 A bunch of young vines, that have not yet had their roots cut in shape.

The little vines have been ordered at our preferred pepinièriste in the local city Vertus for months. It is great for once to be in the vineyard to plant instead of to remove. Even in a beautiful day with lots of sun and 20 degrees Celsius before noon. We have 425 little Meunier ahead of us to replace those that fell.

It is the disease esca, that during the last four-five years has thinned out in the rows. A disease that is incredibly infectious, because there is nothing to stop it. A product that was used before is now forbidden.

Grafting sealed with wax
For the uninitiated and for a first time planter like me as well, the little vine sticks look rather funny. 40-50 centimetres long, coated with a thick layer of fuchsia-coloured wax and in the bottom a net of roots, that is mostly cut off before plantation. Only a few centimetres of roots will ever feel the ground. This procedure is no different from what you do when you plant or move roses and probably other plants as well.

The wax protects the little vine, and especially the place where the top part has been combined with the bottom with a so-called omega-cut. Most French vines are a combination of an American vine in the bottom and a French vine in the top. The two are joined together by the omega-cut that has the same shape as the Greek letter of the same name. It is carved into the sticks by a machine in order to join them together nicely just like a piece of fine cabinetmaking. 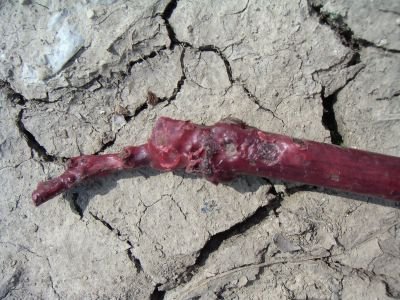 The little bag is where the French vine is joined to the American one.

This hanky-panky is the clever solution of the catastrophy that hit most French vineyards in the end of the 19. century. The insect phylloxera spend 30 years eating its way through the roots of the glorious French wine heritage. When almost everything was destroyed a solution was found. It is used even today.

If you study the above picture carefully, you can see where the vine is grafted. A little bag a few centimetres under the top is where the American porte-greffe meats the French Meunier.

You choose the bottom part of the coupling according to your own conditions. There are special porte-greffes to use in especially acid or basic soils. The latter can be very useful in Champagne, where one of the geological specialities is very chalky grounds. You can also have porte-greffes that develop especially early, which may be interesting in soils exposed in a way that causes late development. 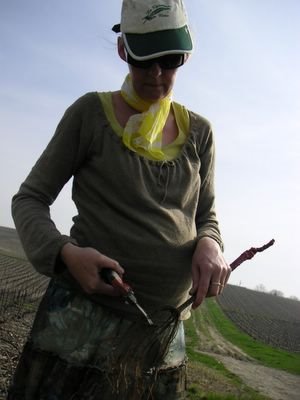 Most of the root is removed, before the vine is planted.

In Loisy-en-Brie however we are rather ordinary. Our porte-greffe is the standardtype of 41B, suitable for soils that are exposed to chlorose - lack of iron. On top of that it is robust and normally promoting a good yield.

So even these deep pink sticks may look rather bashful, there is quite a few years of experience and knowledge of winegrowing on both a general and a local level hidden within your choice. And these carefully chosen vines will now like little children get special attention to provide them a good start. Only in four years they will be expected to grow good grapes in a suitable quantity.

Vines grow in poor lands
When a vine finally gets hold and starts to grow, it is very easily satisfied. Which is why it is - at least has ben - such a popular resident in the dry soils of Southern Europe, where the choice has often been between olives and vines.

In Champagne as well the vines typically grow in the most complicated land. The complications may be due to too many stones, too much water, too much chalk or simply too steep a slope. 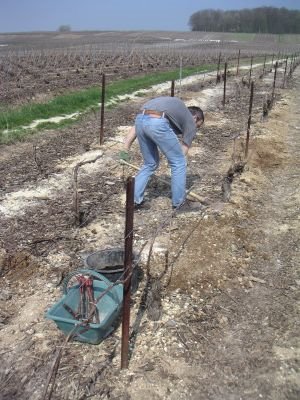 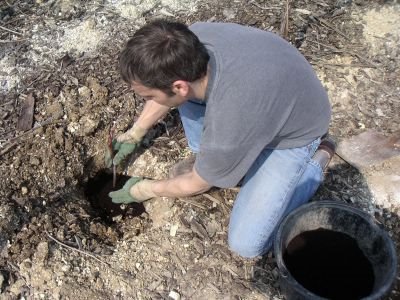 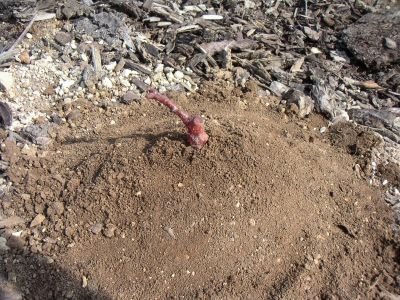 The new vines get their roots buried in a hole of some size that is filled with mould.

We help the new vines to get as good a start as we can. They get a heap of mould in the hole before it is covered with ordinary chalky soil with lots of little stones. The other thing we can do is to secure the young plants against the many hungry guests of the vineyards.

Plastic protects against animals
I may wonder why the rabbits would find these little sticks coated in wax interesting at all. But since all winegrowers protect their new plants in some way and this costs both time and money, I suppose the protection systems work.

We have bought 425 pieces of transparent plastic, that in advance has been punched, to make it easy to put together the plastic into a kind of see-through bell that is placed around the little vine and then nailed to the ground with a long bamboo stick. The art of it is to press this stick so deep into the ground that it can actually stand something.

Still it is a bit of a mystery to me how this fragile looking thing will be able to survive both the violent storms of summer to come and later snow, frost, wind and hailstorms. I note though that these things occur in most vineyards, and they never fly freely around. On the contrary they stand solidly planted protecting the young hopes as they should. So it must work, I guess. 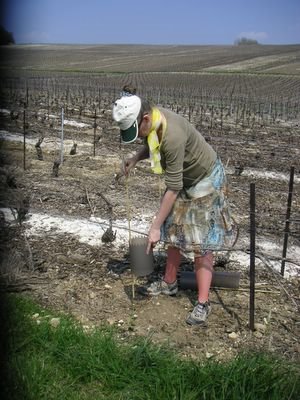 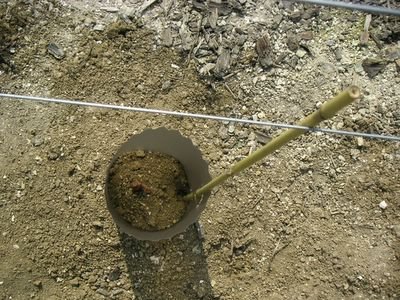 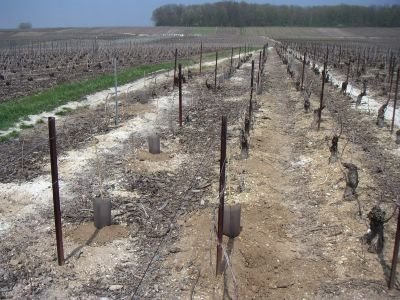 The young vines are protected by a plastic bell, kept in place by a bamboo stick.

Long-winded youth
When they are finally in the ground and properly protected, the new plants will be left more or less on their own. The slow forcing should encourage the general health and strength of the plants. To create a strong vine is at this stage more important than to grow grapes.

This is why we prune the new plants rather thoroughly the first years. It goes for all four pruning methods in use in Champagne.

Next year the plants will be pruned to almost nothing, only up to two centimetres will be left, that depends on the general state of the vine. The more fragile, the more will be removed to leave what is left more nourishment. Next year we will leave a rachet - a short branch with two eyes - and a single eye, if the vine grows well. If it for some reason is still small and fragile, it will be cut down to almost nothing once again. This practise enables it to economize on its strength and hopefully use what there is to grow stronger.

Only after the third pruning the plant will start to look like the older collegues in the row. If it is strong it will be left with a rachet and - since we use the Vallée de la Marne-system - a baguette with five-six eyes.

That speciel attention and carefulness works is obvious. We have some very short rows in one end of the plot with young plants. They have come to an age now where they should be producing grapes at a normal level. However only this year they seem to have grown sufficiently strong, and this is only after special attention for some years when pruning them. But it proves that gentleness works.

Time will tell how the 150 newcomers of the past weekend will cope. They will be accompagnied by another 275 collegues next weekend that are at the moment attending the soils of Loisy-en-Brie in the garage of my belle-mere.