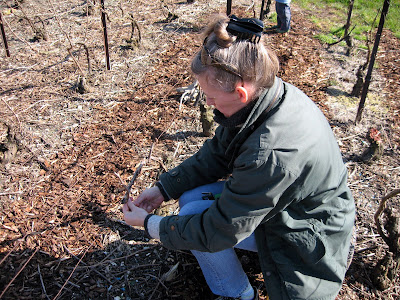 I bind our cordons in Loisy-en-Brie.

A weekend with the vines is over. I have attached almost 100 meters of vines in one afternoon. Alain has removed some of the left, little pieces of wood, that he dislikes so much. And changed more posts and wires, mainly in the new plot of ours. The first driving of the tractor has been rather destructive for the fences, that were already in a poor condition.

Since the vines are pruned cordon-style, there is one old and long branch to attach and a young, one-year-old branch with five buds at the end of the old one. The old branch is binded with as many little pieces of metal thread as it takes to hold it well, generally two or maybe three. One binding is normally enough to keep the young one in place.

Thus the vine will be tied closely to the fence, and it will stay like this until it is pruned again next winter.

The binder
Basically attaching is to bind branches to the fence. Instead of some string tied up with knots, we use metal thread wrapped up with some kind of degradable material. A small tool, specially for this purpose - the lieuse - twists the two ends around each other, and a sort of scissors - like a three-in-one for the nails - cuts the ends when the binding is made. Et voilà. 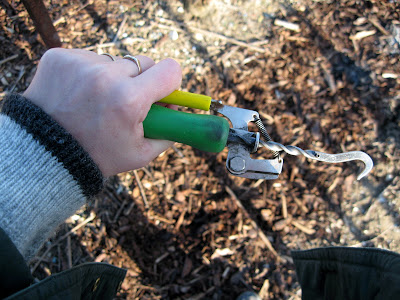 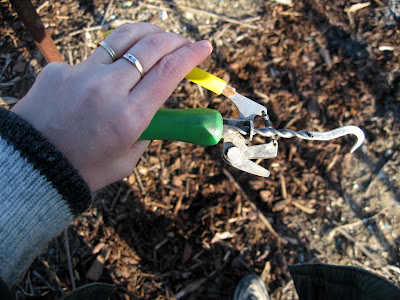 The lieuse as it looks when open and closed.

Well, the only thing is, that no task ih the vine is just et voilà for me.

So far, nobody has been capable of explaining how they actually combine and move their hands and fingers with the string and lieuse. I ask, of course. I ask everybody, who goes in the fields to attach... A profesionnal binding is quick work. Mine are not. I'd like to know the trick.

I bind and I bind and I bind, and one out of two - at least - are not twisted correctly, and holds nothing. Some I have to redo 10 times - no kidding - before they are good enough. Not excactly something that makes you move fast forward. 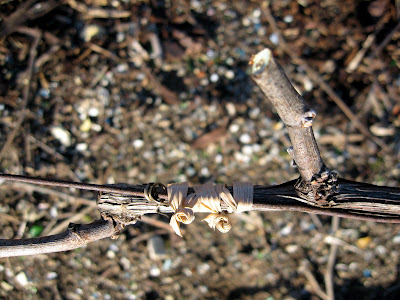 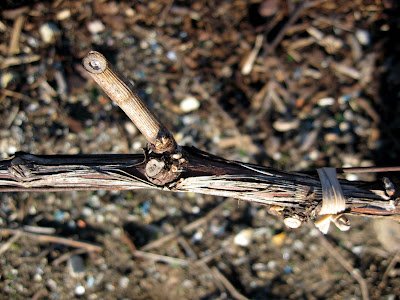 My need for bindings are variable. But some times I do have a bit of luck and get it right in one go.

We have all been beginners, and there is always just one way to learn: Do it. So that's what I am up to. And after some experimenting, I understood that I have a better chance of succeeding when I pull the string backwards and then upwards instead of just backwards. It also helps to twist the ends around each other a couple of times before winding them.

But I still have not made it all the way to an accurate method. Something that works each time. That's for later more experienced times, I guess. I keep on trying.