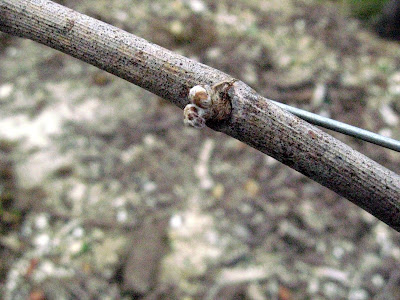 Our Meunier-buds have not really taken off yet.

Our two plots are ready for the new year. Rather fantastic. The two young guys have attached like hell last week and have finished it all.

Now we can quietly wait for the vines to wake up - it is indicated by les pleurs. Sap, that flows down the branches wherever you cut.

So far, it is only the old wounds that cry in Loisy-en-Brie. You can see the sap flow where the branches were cut some weeks ago but not what was cut five minutes ago. That is the first sign. In Vertus les pleurs is fully on now, says one of the young guys. We have heard the same in Verzy, without believing it completely. Vertus does accommodate mainly Chardonnay-plants, that typically start before our Meunier. (Compare dates here.) However, I should be surprised if not the growth of the vines are set to take off now?

Cleaning the vineyard
Alain has been in the vineyards to remove diseased plants. It is another round of esca, that continues to diminish the rows. Unfortunately. It is a problem, known everywhere in Champagne, France and at least some parts of Europe. An offensive spreading, because of the warmer weather. Unfortunately, because the disease kills the plant and is very contagious. 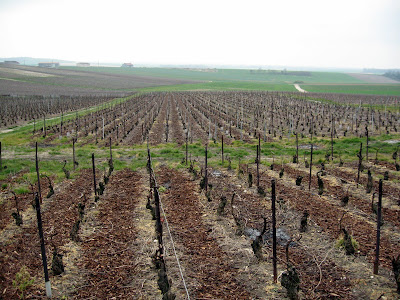 Some repairs of wires and exchanges of posts are left, and then we can relax a bit again, I hope. Alain expects an early ébourgeonnage - the proces, where surplus buds are removed, the size of the production really is controled to the smallest detail in Champagne. Of course it is dangerous to remove buds as long as there is still a risk of frost. But later on it will be much more or even almost too difficult to remove the surplus. Therefore it will be done even with the risk of frost, that is even bigger this year, because everything is so advanced.

By the way, the weather is rather peculiar. At the moment we have quite cold winds, that mix with the general picture of bulbous plants blooming, warming sunshine and even the first light, green leaves on some bushes. So it remains completely advisable to keep the head cool and the throat warm. The coming night we even may get frost, warns the weather girls.