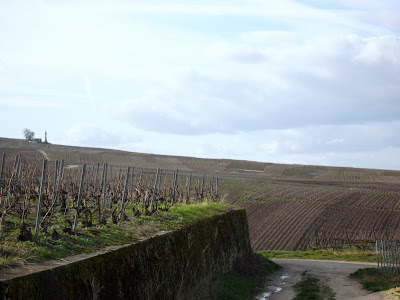 With early spring the fear of frost has also arrived in Champagne.

There are loads of things to fear, when you grow vines. You may use winter to relax yourself - after all the vine rests in this period - and to get back on top after the different series of risky incidents of the season. Straigt after you are bound to slide back in the dark and reach your first fear of the year

It will be more or less at the time, where the buds will be back in business. They grow, they swell and finally the first leaf of the year unfolds. An awful period, where one night of frost may result in big losses. That depends on the amount of burnt buds and how badly damaged they are. This is the very early beginning of the grapes, that thus will be killed at birth by a King Frost, who had not after all lost his teeth.

So just forget everything I've just said - knowing nothing or not thinking sufficiently ahead - it is now or soon that frost will start to perform as a subject in sleepless nights here.

"Don't you see," says Alain, "In a year, where the vines may start to grow very early, the risc of a night with frost is even bigger than normal. Sure, it may freeze all the way until May.

Army of lamps
In the Côte des Blancs I have seen the first examples of the rather gloomy looking lamps, that are placed in the rows of the lower plots. Flat and therefore more likely to catch problems with frost.

In nights of frost the owners or workers watch or at least regularly check the temperatures. If they reach a certain, critical limit, the lamps will be lit. Their heat may bring the buds safely through the coldest hours. Often the last ones before dawn.

Also in the low and flat plots of Verzy there is some sort of protection against frost installed. It is the house of Louis Roederer, who has installed a system of warning, a neighbour of ours said. A lamp at the road used to light up at critical temperatures in the plot. We don't know if it is still in use though. Also not how the vines will be kept warm. But it may be with lamps like those of Côte des Blancs.

More about the lamps: Icy fingers of King Winter