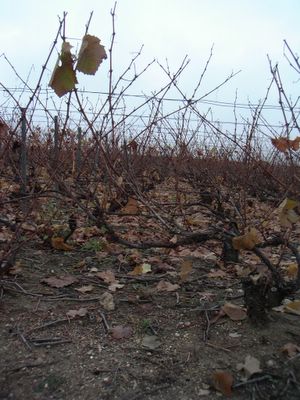 Not many leaves still hang on, here Chardonnay at Verzy.

The prices of land in Champagne still rise. That is, for the land that is part of the delimitation.

If you are allowed to grow vines on your land and make champange of the grapes, the daily walk is almost equivalent of walking on gold.

Land and sales grow
In 2005 a hectare of vines in Champagne cost an average of 600.000 euros per hectare, an increase of seven percent since 2005.

A situation, very contrary to that of the rest of France, where vineyards that are a part of one of the other French appellations cost 42.750 euros per hectare, which corresponds with a decrease of 3,9 percent since 2005. In other vineareas - for instance the vin de pays - the picture is even more gloomy. For the average.

The high prices of land in Champagne are connected with the ever rising sales of the last years. In the first half of 2006 with an increase of almost seven percent months even before the traditional peak, Christmas and New Year's Eve.

Difficult return of investment
The expensive plots are connected with the big growth of sales. So we cannot complain, I suppose.

Still, it is sort of inconvenient, because it means, that it is very close to impossible to buy plots for any other than good old Uncle Scrooge. And does he drink champagne at all, I wonder? Some plots are traded anyway, but how the buyers get their investment back, I have not yet understood. 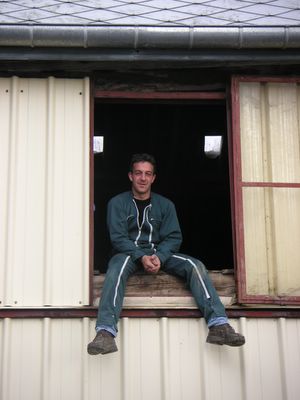 The French equivalent of Kansas. Inside is nephew David.

The French Kansas
There are now obvious disclosures of the wealth here. The vines look like any other vine. The houses are pretty ordinary. The roads full of holes. People work in their boiler suits like they would do in all other vineyards. The French equivalent of the Danish blue Kansas is a bottle-green model with two big zippers, that open the suit completely, so you can just step out of the dirt if necessary.

With the cars, you start talking. The four-wheel-drives are big, I never saw bigger ones, but then I did not live in the country-side before, and here they actually move on dirt roads with holes full of mud and small or big stones to force. But, there are quite a few Mercedes Benz, BMW's and Audis in our streets too.

And if people can afford to pay more than five euros to get a brioche a the baker, some has got to have money to spend lying rather loose in their pockets. Every second time the brioche is even baked too hard. The other half it is a real treat. And it does become sort of a sport to see if it is one or the other type of Sunday.