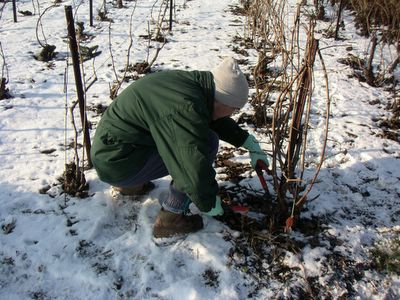 Bare wine after the pruning (left), more brown before (right).

My new hobby - from the passengerseat in our four wheel drive - is to spot whether and how the wine has been pruned. The thin but still white layer of snow of this weekend provides a good contrast to the long, brown rows, a good help for the eye.

Now of course it is not that great an art to manage counting the branches after the plants have been pruned and left nice and easy on their never ending rows with just the necessary amount of branches and buds for the season to come. It is much more demanding to find the structure of the plant - before the pruning - in the confusion of long branches and leftovers of now completely dried out grapes.

Whether the branches still chaotically point at all corners of the world or have been almost completely cut is a matter of geography rather than human energy.

Eksposed for the cold
Mainly the local, meteorological conditions decide when the wine will be pruned.

In Verzy we are on the cold slope of the plateau Montagne de Reims facing North. All of January people here have not been too busy pruning. Whereas on the slopes of Côte des Blancs - facing South - people prefer to be finished by the end of February or beginning of March.

The trick is to finish exactly on time: Not too early, it is good for the wine to rest a while, where it is not manipulated at all. But also not too late, if the latex in the plant has begun rising, the plant is much more exposed to the dangerous frost, that may still occur in spring, through the growing buds and wounds from the pruning. 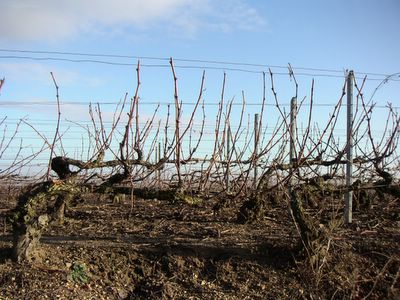 The horizontal old branch is the cordon.

Different methods
On our regular weekendtrips between Verzy, where we live, and Soulieres, where we work, we see at least three of four possible ways of pruning.