One day the holy Vincent stopped in front of a wineyard to speak a few words with the peasants there. In the meantime his donkey ate from the young branches on the wine. Now at the following wineharvest it was obvious, that the wine had much more and better grapes, where the donkey had gnawed, than where the branches had been left in peace. This is how the donkey of the holy Vincent invented pruning the wine. 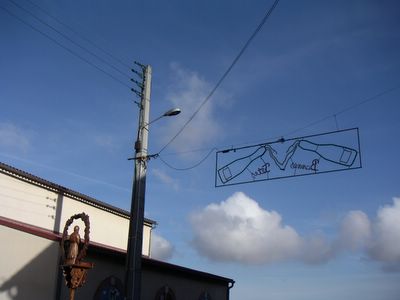 It may not be the true story of why Saint Vincent is the guardian saint of the winegrowers, but I am sure it is the best. Other - and perhaps more prosaic explanations - point at the fact that the first syllable of his name is vin. Furthermore his nameday - the 22nd of January - is a time, that at least in earlier days gave a natural break in the work in the wineyards, because the pruning normally only started after Saint Vincent.

And this is way the day of the holy Vincent is a natural day of party in all little winevillages - not only on Champagne - but all over France.

Partyday in Verzy
In Verzy the big party of the year begins with mass in the local Saint-Basle. This is were the stick of Saint Vincent - the batôn - is collected. The procession is formed on the square in front of the town hall. The bakery, that delivers the brioche, is conveniently placed on the corner.

We sense the spirit of party already before we have made it completely downhill. All - or anayway a big part of the 1000 inhabitants - are in the streets to participate in the procession and maybe have a drink or two at the target of the defilation, one of the cooperatives of Verzy. Others will go on and continue with the common meal in the salle de fëte and maybe even all the way though the dance tonight.

But that is for later, for now the official members of the procession find their spots in the already defined order. First the orchestra, then the flag and the desguised children, Saint Vincent and his carrier and finally la confrerie, the brotherhood, the local guild of winegrowers and makers. All of them dressed in the same blue shirts, black caps and big, white aprons. They carry the special sacrament of Champagne. 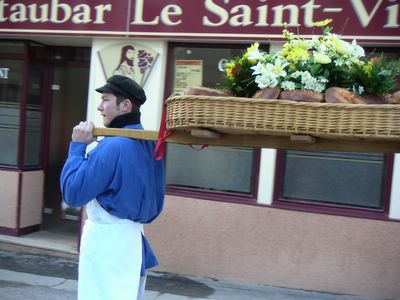 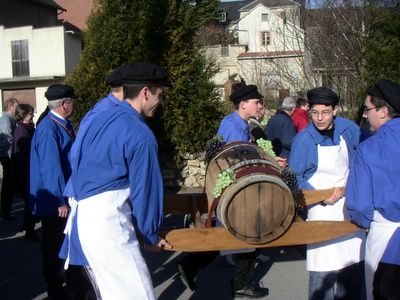 Or the local interpretation: Champagne and brioche.

Since the procession only demands active work from nine brothers, four to carry the barrel, another four for the brioche and the last one for Saint Vincent, a number of others share samples with the locals. And I suppose, that it is this part of the party, where some documents draw a direct line from these Saint Vincent parties and all the way back to the dionysic bakkanals and their sacrifices of wine.

The samples are given in the pipette, that is used in the caves to taste the different wines. The principle is: You lean the back of your head backwards, I pour until you tell me to stop.

Now thinking about it afterwards, I am not quite sure that it is comme-il-faut to keep on swallowing until your husband draws your attention to the fact that you are not obliged to empty the thing. In that case this is not the first time, I meet the differences of Danish and French drinking cultures. 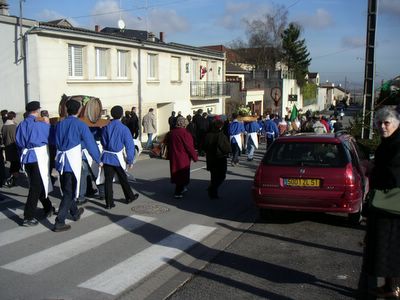 The procession on its way downhill to the cooperative.

To the sound of intense tooting and drumming the procession finally and at a brisk trot moves downhill to the coop of the day.

This is where the brioche will be eaten, this is where more champagne will be consumed. There will be speeches and distribution of diplomas for those who have qualified themselves during the year. The party goes on in the village hall with more food and wine and music all day long.