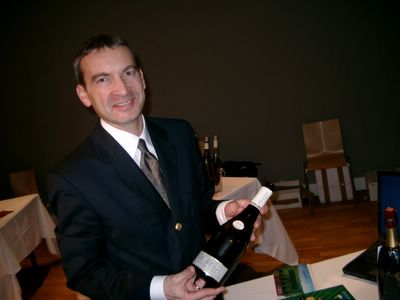 Alain promotes the sales of Le Vertueux in Paris.

It is not an easy job to excite a farmer. That goes for Champagne as well. Even for those who are lucky to grow wine and not wheat. However, it has been rather difficult not to rejoice since the greatest harvest as long as anyone remembers. It is not going to be any easier now the worldwide sales last year turned magic 300 million bottles.

All in all 300.621.591 bottles left the chalky caves of the region during 2004, a bit less than 2,5 milllion more than the year before. Most of the bottles - six out of ten - pops in France. And for the rest the major export markets are still the United States, Great Britain, Germany and the Benelux-countries. But surely the marketing staff of the big champagnehouses already gazes at exotic regions such as Japan, China and Russia.

Advance in distant areas
The sales of champagne to such far away horizons grew six percent last year, in Singapore alone more than 200 percent. Which of course is not a great deal, if you start real low. However, it points to a certain intereset probably worth a follow up.

The record of Champagne clashes with most other wine areas of France. Most of them with economic crises hanging black and heavily after now yet another year with decreasing sales abroad. Apart from Champagne only Cognac managed to increase exports in 2004. 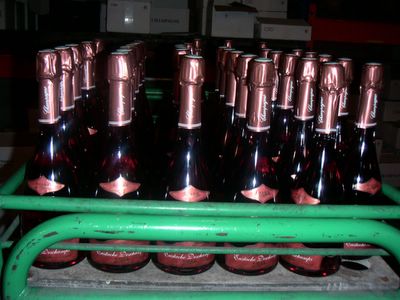 A bunch of rosées ready for the party.

Champagnelovers with a particularly good memory may object, that 327 million bottles were sold already in 1999. But that does not count, according to CIVC, the official organisation of the champagne industry. Too many of those bottles spend the turn of the year in a storage rather than popping it off at the party of the millenium, says Daniel Lorson of CIVC to French newsagency AFP.