More champagne for the people

Good news for all lovers of champagne: The production will be raised. This announcement was given only few days after the news, that the sales of champagne last year passed 300 million bottles. Now the industry tries to avoid to superheat the market. That is to act before you may get a market with too many buyers for too few bottles.

A small majority in the board of CIVC - Comité interprofessionnel des vins de Champagne *** see below *** - has agreed to send more still wine on the market. This means, that ordinary wine without bubbles similar to 1.000 kiloes of grapes per hectare will be sold from March 7th. Producers can from this date buy more wine for their production of champagne.

Quantity or quality
The final product we will not see for sale neither in the small private shops at the winegrowers houses nor in the supermarkets in the near future. An ordinary bottle of champagne most mature at least 15 months. Only after this period the bottle will be finished and prepared for sales. 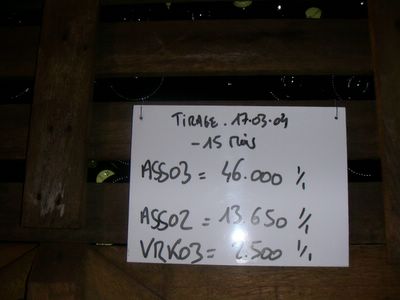 A standard champagne with no year must mature at least 15 months.

However... it is difficult not to worry a little bit when one of the CIVC-presidents, Patrick Le Brun from the winegrowers organisation (SGV), according to the local paper l'Union will prefer to see a "... growth in value rather than volume". That is - in the long run - he wants to sell less but more expensive bottles.

Don't call for crises
Should we dare, we could look a bit further south - to Bordeaux for instance, the wellknown wine area, that currently groans and moans with the weight of its poor sales performance due to big stocks with expensive wines, that less consumers want to buy. With this in mind the pipe dream of the president can leed to minor spasms for small families, that consider making the pretty grapes their fulltime living.

Could one possibly imagine, that also the market in Champagne might fall over. It has happened before, actually not more than 15 years ago in the wake of the Golfwar, when the prices went down in line with the sales. So far we see no signs of eeriness. The sales have been fine also in January this year, and the prices are quiet. May it stay that way. 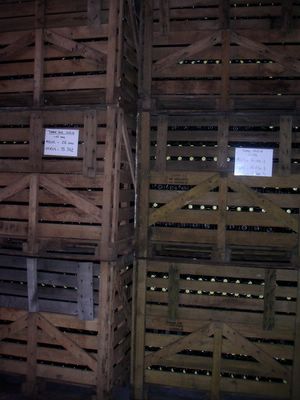 Shoulder at shoulder in box on top of box.

*** CIVC: Professionl unit that - manned with representatives from the big champagne houses and from the winegrowers union - controls the champagneindustry. They communicate with the French ministry of agriculture on one side and the growers and producers on the other. During the harvest the CIVC gave the permission to deliver 1.000 kilo per hectare on top of the normal quota of grapes. This is also where it is decided, when the different areas may begin the harvest.