To prune is for the brave 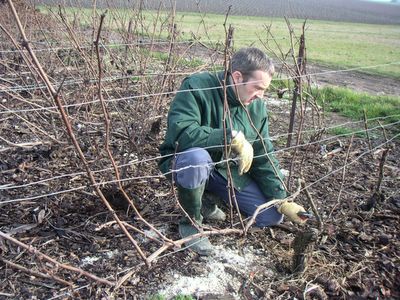 The only intelligent piece of work in the wineyard is the pruning. A quote from Alain. During this period it is a clear advantage to keep your head close to the ground and focus your thoughts on what is going on on the other side of the scissors. This is the time to make it more easy for ourselves in March when the branches are attached to the wires. This is the time to make harvesting of the grapes more simple. This is the time to renew the wine so it keeps on developing grapes of great quality not only now but also next year.

The theory is simple. We mainly grow red Pinot Meunier-grapes, and they are pruned according to the Vallée de la Marne-method: You've got an old tree stub with a mess of young branches going out in all directions. Only two of them and a small bit will survive the pruning. 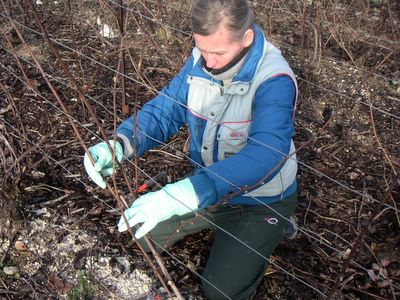 An old, a new, a bit
The first thing to deal with is the old branch with its greyish, wooden surface. A number of branches have grown from this old branch since summer, and the best one will survive the pruning in a length of eight buds. All other young branches will be removed. From these eight buds the new production of what will become grapes will develop. Should there be two branches that qualifies as the old one, it is normally the younger one that will survive. The older one will normally have grown so much, that its growth could bother that of the neighbouring plant. These elder branches often have a diameter of several centimeters, so they require a quite determinated meeting with the scissors to let go.

The productive old branch will be accompagnied by a young, brown and still bendable branch, that - still according to the pruning-theories - has developped from last years bit. The young branch will be cut at a length, that allows it to surpass the lower wire with just one bud above. However it must not meet the young part of the old branch in order to let the buds of both branches develop quietly. Next year this new branch, that during the year will develop a rough, greyish surface, will replace this years old branch.

The last thing to do is to prepare the bit, that will deliver material for the young branch of next year. A last and strong branch will be cut off right in the middle between the second and the third bud. And this is how you renew a wine. Quite simple. 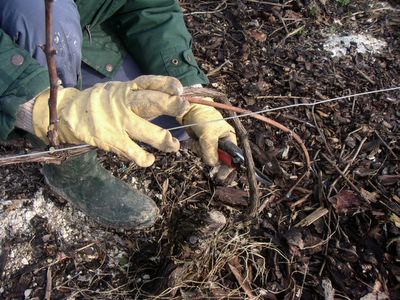 The young branch must reach over the lower thread, but not disturb the productive part of the old branch. Alain checks.

Theory and reality
With theories however you often experience that they often seem more fit for books than for reality. Which is the case with wine as well. In reality not two plants can be treated 100 percent the same. You must understand the special conditions of not only each plant but also of the neighbouring plant, before you can decide how to deal with each one.

The only fixed condition is, that the majority of the branches must be removed. How many and in which direction depends on the condition of the particular plant but also that of the neighbour: Is it alive, dying, too young?

If the neighbour for one or the other reason does not grow enough grapes, your current plant must produce grapes for two. Which you enable it to do by leaving two old branches instead of one. They will be bend and later attached to the wires in both directions, each of them left with eight buds for the grapeproduction.

Another type of problem is when the branches, that have developped from last years bit, are too weak or grow too far away from the center of the plant. The latter is dangerous for the production, since the tractors, that cut off leaves during the summer, easily break branches, that are not close to the wires. To prevent this such a branch will be abandoned no matter it may be both strong and healthy. Instead a less healthy branch in a less marginal position will be chosen. Are there no good branches to choose from, the least bad will be used. 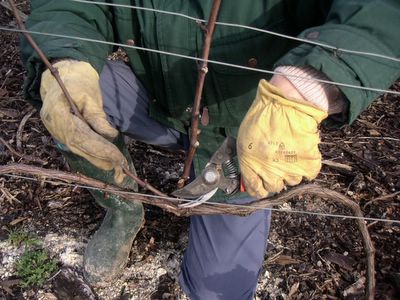 You need to do some thinking before you can finish cutting.

An art to clean thoroughly
We renew the plants all the way through and strictly stick to this principle. Alains great idea is that the wine develops better, if it has been cut thoroughly. Extra branches, extra buds will give more work several times later in the season. Also it will spread the energy of the wine instead of letting it concentrate only on what is necessary.

A bunch of young plants are clear examples of bad pruning. They are around five years old and should during their first three-four years have grown enough to reach the wires. But that has not happened. Typically because they have been allowed too many branches. If the guy who did the pruning instead had chosen and stayed with only one strong branch, this one would have grown much longer during the year.

Wrong or bad pruning means smaller, less or - worst case scenario - no grapes. Instead the neighbouring plant will have to produce double until the new plant is ready to perform. 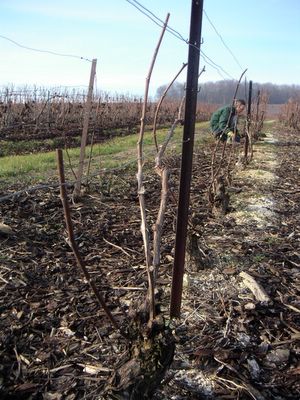 This plant has two old branches, because a neighbour does not grow grapes.

Dead branches
One more parameter is important. Once you have found the branches you need, you will have to make sure that they are healthy, and you better do it before you have spend time cutting all other branches off. Otherwise this too will endanger the potential of your plant.

For the non-experienced wineworker - such as me - all branches are brown or greyish in the case of the elder ones. For Alain however a glimpse is enough to judge a what seems to me healthy and sane branch dead as the dodo. The test is to cut a few centimeters off the branch and check the core. And sure as Christmas will always be green and wet in Denmark you will find a brown and yellow core instead of a healthy green one. Only 20, 30, 40 up to 50 centimeters down the branch and closer to the stub you may find signs of life. But normally a branch that much shorter will not be able to supply the necessary eight buds. Which is why such a halfdead branch must give way for another, even if this one at first glimpse seems more fragile.

This ability to perceive disease and death, where everything seems just fine for the person who is not skilled, is what you call experience. 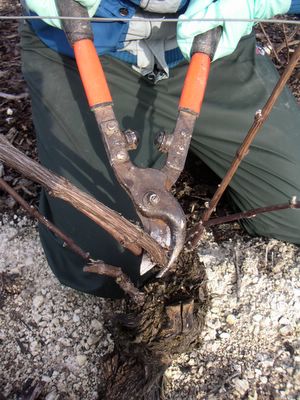 The big scissors are used to cut off the oldest branches.

Experience, guts and strong hands
Alain is able to sense this real condition of the wine, but is hardly able to explain what makes him spot diseased plants or branches. Why does he stop in front of this particular plant but not the next one? It has to do with the colour, with the strength, with an idea that something is wrong here, but for a non-skilled person as myself there are no hard facts to learn by heart.

To become experienced you more than anything need time. Just like the best wines. Experience develops as you year by year study the looks of the plants, the development of the plants and compare these with your own work with the wine.

With your experience you need a certain courage. There is not much left on the stub once you finished with your scissors, so you better believe in yourself and the decisions you made regarding the pruning.

Finally on top of experience and courage, you need a bit of something as simple as physical power in your hands to be able to cut the thick branches. Then at last you are set to go joining the winterarmy of wineworkers, who right now are busy pruning all the wine of Champagne. Thoroughly or not 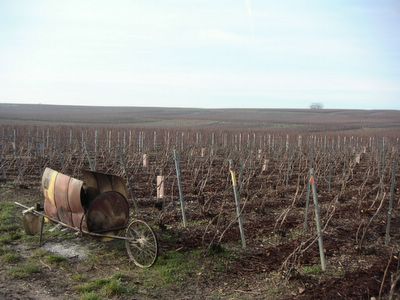 Wheel barrow constructed of an old oil barrel, used to burn the cut off branches, that otherwise would have to be carried away. You also keep warm with a mobile fire next to you, but must accept smelling petrol for days. 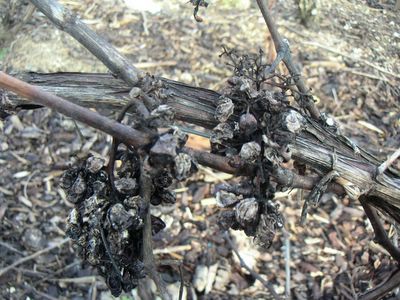 Grapes left after the harvest are rotten first then dried out. Cut off material can only burn, if the grapes are completely dry, which is a problem this year.
Indsendt af Sol kl. 1:51 PM