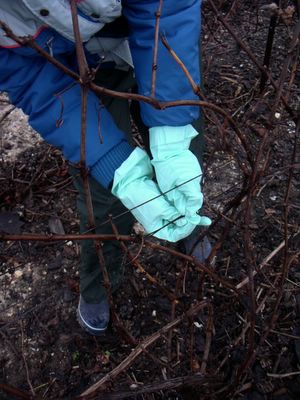 Off goes the small plasticstaple.

The first job of the year in the wineyards is to collect plastic. Not the little broken pieces, that mingles with very wet chalk, mud and pieces of wood on the narrow lanes between the plants. They will stay forever. Their unbroken collegues from the wires though must be collected, before the pruning of the plants can begin.

Which is why we are here, under a sky almost as grey as the winter in Scandinavia, instead of sitting nicely in front of someones fireplace, video or other, more cosy and definitely warmer things to do on a day like this. But a lot however comes down to wearing the right clothes, so with my mother-in-laws homeknit hats, 20 year old skiing jackets and similar vintage-equipment we stand the cold through the couple of hours, the days still remains sort of light.

A wine is a plant that needs something to climb in the beginning of the season of growth. Later the new branches needs help to carry the weight of the grapes. Otherwise they may break. This is why you construct these solid wires that are seen in every wineyard around. They consist of iron posts, dug well into the ground, and a number of vertical metal threads, on to which the old branches are tied in the early spring. Later in the season the thin summerbranches can climb and hang on to these threads. This is where the flowers and later the grapes will grow. If you want everything nice and orderly in your wineyard, you may find it a good idea to invest some hard work doing these wires right, which is what everybody do anyway. Row up and row down with exactly one meter and 20 centimeter between them, the wires are spread allover the wineyards of the area. 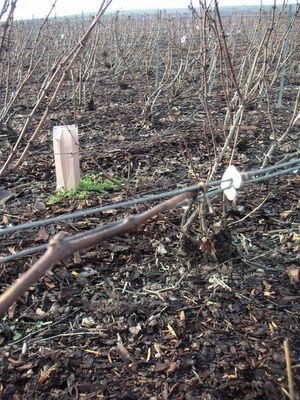 The staple keeps the metal thread together.

The job of the staple is to keep the two next-upper vertical threads together. Each of them is fastened on the iron post but one on each side, which leaves a hole in the middle. This is where the young branches of the year are supposed to come up. In this way you can keep them nicely along the wires instead of having a jungle of branches, some pointing east or west and yet others north or south. A mess like this endangers them in the summer, when tractors are driving up and down the rows. At this time of the year all work is manual. The juices of the now sleeping plant are concentrated in the oldest part of the branches. The rest of them will be cut off during the period of pruning.

Before however the staples must be colleced. In our 36 rows of wine this would take one person around the day, less time for Alain as experienced and impatient and more for me as being unskilled and interested in learning. However since Alain already in December has begun collecting the little things we can finish in around two hours. Which is nice since my toes after two hours of work start to change colour from pink till slightly blue. The result of spending these hours in the company of a very cold and rather extraordinary wind for this area.